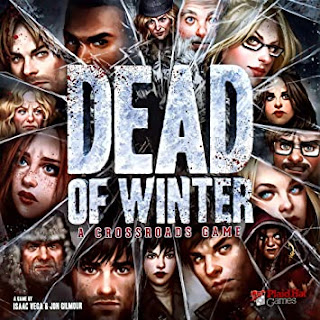 OK, though Talisman will probably remain a forever fave of me and my fellow board warriors in my group, DoW has become a close second.

My local besties B & L sold their house and hit the road in a huge pick up and a luxury mobile trailer to see the country. Until we discovered Talisman had a digital online version, our gaming pretty much halted. But last summer, when they were managing a nice RV park near Salt Lake City, I made the 6 hour drive to spend a few nights in one of the parks hotel rooms, and besides hiking in the local national park (and spending a bit of time in the RV parks rustic pub) we spent most of our time  playing the shit out of the board games I have mentioned previously, but especially our newest jam Dead of Winter.

Here is Board Game Geeks description:

"Crossroads" is a game series from Plaid Hat Games that tests a group of survivors' ability to work together and stay alive while facing crises and challenges from both outside and inside. Dead of Winter: A Crossroads Game, the first title in this series, puts 2-5 players in a small, weakened colony of survivors in a world in which most of humanity is either dead or diseased, flesh-craving monsters. Each player leads a faction of survivors, with dozens of different characters in the game.

Dead of Winter is a meta-cooperative psychological survival game. This means players are working together toward one common victory condition, but for each individual player to achieve victory, they must also complete their personal secret objective, which could relate to a psychological tick that's fairly harmless to most others in the colony, a dangerous obsession that could put the main objective at risk, a desire for sabotage of the main mission, or (worst of all) vengeance against the colony! Games could end with all players winning, some winning and some losing, or all players losing. Work toward the group's goal, but don't get walked all over by a loudmouth who's looking out only for their own interests!

Dead of Winter is an experience that can be accomplished only through the medium of tabletop games, a story-centric game about surviving through a harsh winter in an apocalyptic world. The survivors are all dealing with their own psychological imperatives, but must still find a way to work together to fight off outside threats, resolve crises, find food and supplies, and keep the colony's morale up.

Dead of Winter has players making frequent, difficult, heavily-thematic, wildly-varying decisions that often have them deciding between what's best for the colony and what's best for themselves. The rulebook also includes a fully co-operative variant in which all players work toward the group objective with no personal goals.

That all sounds cool, and in reality its all true. There is a certain amount of complexity (nothing like some of the more popular Lovecraft games) but its fairly easy to pick up if you are focused at least for the first hour of the game. Most of its mechanics are intuitive.

So you are living in a walled off community. You each start with two characters, with stats related to fighting, leadership ability, and scavenging. For instance the soldier has a high charisma and fighting ability, while the schoolteacher has improved scavenging in the school location. There are not hit points per se, but exposure to the elements and the zombie hoards outside can inflict wounds, and a zombie bite might outright kill you, and endanger others (if you get bit near others then you have to roll exposure for them - basically the dead character is now a zombie attacking them. A lot of elements in this game you have to make assumptions like that because, thankfully, the creators didn't want to waste to much of your time on fiddly details). 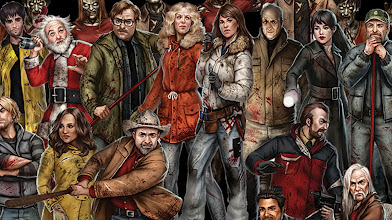 The colony has its problems from turn to turn. When you use resources the trash piles up, affecting morale. You also need a certain amount of food to keep every body happy (besides characters there are a few nameless non coms you have to take care of). You are constantly trying to maintain a balance to keep morale from going down.

Besides taking out trash and such, the characters can go outside on their turn (rolling for exposure to the weather and zombie bites each time) and do some scavenging for food, weapons, medicine, and tools. Locations include the school, police station, grocery, and library. Just like the colony gates these areas can become overrun with zombies, so killing them now and again is a good tactic to keep things from going out of control. If a place gets overrun then characters start dying. 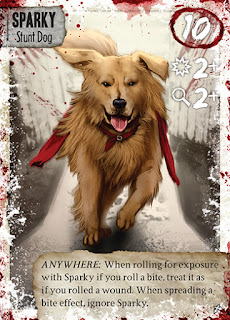 When starting a new game you pull a card for the entire games tone and goal (keeping people fed, worrying about the trash, finding a certain amount of medicine, etc). Each turn you pull a card for that turns immediate goal (just lesser versions of the main game goal) and each turn another player will pull a crossroads card for you before your turn. That card has certain events that happen to a character on their turn, and often depends on certain things like if a particular character is in play or an action the character might take. Crossroads might also include an immediate event that almost always includes a choice to be made. Maybe you encounter a bus load of kids and have to decide if you can take them in and feed them, or if you abandon them (often all players vote on the outcome). Morale is often involved here. 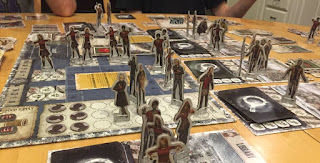 Then there is the goal of each player. At the start of a game each players secretly pulls a card for that. It might include things like end the game with a certain amount of guns, or to have a certain amount of characters under your control. Mixed in with these random motivations and requirements is a traitor card. There is a good chance a player will pull one, and buddy, these can be a pain. It usually requires that the game ends with zero morale on the board and you needing to fulfill certain requirements similar to the turn by turn cards. These are often seemingly impossible feats to accomplish. You need to work at fulfilling your requirements and lowering the colony morale without tipping off the others that you are a traitor. The players can vote to kick somebody out, and that just makes it all harder. Though being a bad guy in plain site can be fun. A nothing to lose scenario. I had a habit of pulling the traitor card in more than half the games we played, and had concluded that they were impossible. But in one of our last sessions I actually pulled a win out of my ass in the final turn. I needed morale to go zero, and I needed to have more characters in hand than anybody else. It wasn't going to happen, but suddenly the stars were right. Morale was low. I realized only one player had more characters than me.  I managed to get a crossroads card that gave me two more characters, evening me up with another player. I still had a move left so I had my karate guy move to a location with somebodies janitor character and kill him in a fight. That allowed me to have the most characters and brought morale to zero to end the game. It was an exciting win in a game that most of the time everybody loses, and it took the other players by complete surprise. So if you are the traitor it can pay to wait things out and hope the stars are right for a win in the final turns. 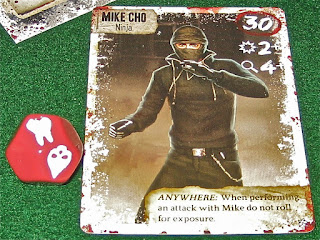 There seems to be endless variation because not only are there a lot of characters to choose from, there are tons of all the cards. The crossroads deck is huge. So no games should ever play the same twice.

I love a lot of the characters, but one of the funniest is the mall Santa. An old drunk who still wears his suit, the colony actually gets a boost in morale if he dies. 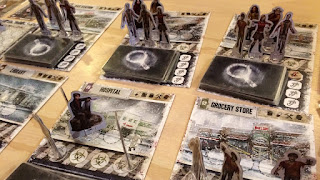 Like Epic Spell Wars and King of Tokyo, this happens to be another game I encountered on Will Wheaton's Tabletop show (I actually saw it in a store originally but watching the episode cinched me buying it). I find it one of the most entertaining episodes and it features the late Grant Imahara and Ashely Johnson of Critical Role and The Last of Us fame. Its especially fun because you don't find out who the traitor is till the end of the episode, and its a great twist.

There are other editions of the game I have yet to sample, but that in itself might be a good reason to go to a convention for the board game room.

Its another long form game, usually taking 3 hours for three players. On game days we liked to play a game of this, and if we had another hour or so do a few shots of our shorter games. I love this game and King of Tokyo and Spell Wars, so days I got to play all of them were a great day for me.

Oh, also, I love the art by Fernanda Suarez. There are certainly some beautiful looking people in the apocalypse.