Runequest: Dragon’s Pass is so Passe 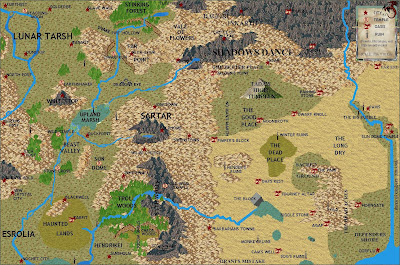 So far so good with my old school Dragon’s Pass Runequest campaign. I think the players are liking it, despite not everybody really investing a ton of interest in the setting (my fascination with Glorantha since childhood being my main reason for running this now) or the whole rune concepts. Only a couple of the characters have a god association at this point. I think that the main appeal so far is the down and dirty nature of the combat (one lucky hit can kill anybody) and it’s often visceral outcomes, and the fact that it is just such a different system than D&D. I’m glad it’s fun, although it is still a tad early to see if it will have the surprising wild popularity of my on-hiatus Star Wars KOTOR campaign. Of anything non-D&D I have done with this group, that seems to have had the most appeal to them, despite nobody in the group being overly fond of Star Wars. Even Big Ben has expressed interest in a SW campaign of his own (though sadly he seems to want to do it near the movie timeline).

Anyway, I’m jazzed to finally be doing some classic Glorantha, and I can foresee running it for several more sessions before needing to get back on that Star Wars track. One of the interesting things I’ve found online is how many people have played RQ for decades almost non-stop. To many of these people, the thought of somebody doing the “old setting” in Dragons Pass seems almost quaint. They are like old warriors “Ah, I remember Dragons Pass and Prax from the days of my youth. Sometimes I long for those humble and basic places.” You see, they have long since moved beyond the very basic locations of Dragons Pass or Prax. They have had campaigns where the braving of Duck Tower and Snake Pipe Hollow are distant memories. Their adventures have taken them to Griffon Mountain and beyond deep into the Lunar Empire, and off across the sea to other continents. You see, while Dragons Pass is sort of a Scotland/Finland amalgam, and Prax Mesopotamian in nature, other parts of Glorantha that are akin to Pirate genre, Medieval England, Africa, and Asia have long since awaited exploring, and these old RQ fanatics have explored them all. I get bits and pieces of info from my communications online about these great campaigns, but just not enough.

Will I run enough Runequest to let my players explore beyond the basic setting? Who knows. But I did nab a pdf of Griffon Mountain today. That’ll get saved on a flash drive in the hopes that in a year or two, we’ll still have enough Runequest interest to move beyond the humble hills of DP and the arid plains of Prax. 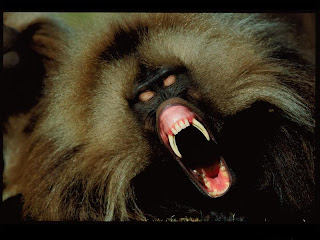 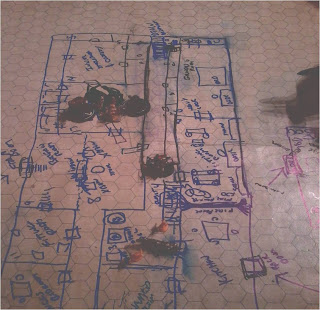 I’m not one of those DM’s who obsess on taking photos of the mini’s on the table during game night, and I have at least one player who will laugh at me for doing so, but it was necessary just this one time…

We were doing a Baboon (in RQ intelligent simians) assault on that famous Pawnshop in the village know far and wide for its apple orchards. Broker and Issaries Runelord Gringle hired the young characters to protect the shop while he and his duck assistant Quackjohn are away for the night. This gave players a nice tour of one of the most secretive houses in Sartar. They had full access as they awaited the baboon attack. Indeed they finally did, eventually breaking through the roof and into one of the first story storage rooms. In the upper part of the map you can see a couple of characters and four baboons tangled in the throes of mortal combat. Down below, in the little Issaries chapel next to the the kitchen, Terry’s character Rowan observes a big centaur breaking down the door from the kitchen, as a couple of little crested Dragonnewts rush into the room with bows at the ready. Who are these strange invaders and why are they attacking the shop at the same time as the baboons (no spoilers please)?

So anyway, we had to stop just as things were getting really interesting. We’ll continue next week. As you can see, the map is kind of a mess because I only had a couple of minutes to draw it out. Fake. I actually did it a week ahead of time, and it’s still kind of sloppy (although I don’t think the players minded). I just can’t draw a straight line. Before we got cleaned up for the night, I snapped this pic to help us place the minis and take up the combat from that moment in time next week.

I don’t mind saying so, but I think we are having some fun with Runequest.