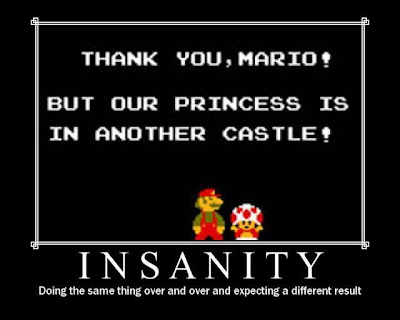 In last week’s Night Below session, you could tell things had gotten really high level. The party continued the assault on the Kuo Toa Priest King’s palace, and took on the king (a 12th level fighter/cleric), the last Illithid in the city (as far as the players knew), a couple of the kings 10th level fighter guards (complete with good armor and magical great swords), and a handful of 5th level “whips” (fighter/thieves). The main temple of Blipdoolpoolp might have been a better strategy, in that the destruction of the statue in that place would reduce all Kuo Toa priests in power, including the king. But the decision was settled on to take on the palace because the Illithid there bore the Crown of Derro Domination. And they managed to get their hands on it, in addition to fairly handily take care of the royal guards and the king.

A really high level spell was encountered in the king’s chamber, a Symbol of Insanity that the king inscribed upon the floor of the center of the room to hopefully catching any foolish enough to charge right in. Well, Vaidno the Bard was so foolish (actually, a pretty brave character who comes off these days more like an acrobatic fighter), and he tripped up the symbol.

What a powerful spell this is. See, the king had the spell per the module, and I hadn’t really studied on it significantly. So when it was set off and I looked up the save, it said “special.” The Symbol spells have a variety of affects, but it turns out in the case of this one there is no save. On the spot I could not really figure it out, and we even looked in the DM guide. The only indication of save is in the Confusion spell that you are directed to for rolling on a table for affect (run away, fight your friends, etc). That spell gives a save -2. Anyway, not wanting to burn the player with a permanent spell that only a Wish or Heal spell will cure (ironically, it was a player complaint that kept Terry from running two characters some time back, depriving the party of high level hobbit cleric Kayla, who was the only character that could provide a Heal spell), I decided to give that save as per confusion. “Surviveno” made the save, as usual.

Was it wrong to not go by the book and mess up this character, effectvly taking him out of the game for the final session of the campaign? Well, I wasn’t sure of the spell, and basically decided it was better to decide in favor of the character in case there was some addendum to this spell that we later would find, after Vaidno had already ran screaming into the Underdark or was dispatched by the others for attacking them.

In all honest, I know we are dealing with high level spells, and some of them can just mess you up, saving throw or not. But a spell that a character would just step on and be really messed up with no kind of save seems kind of bogus to me. The character could easily have missed his save and been jacked-up anyway. It seems much more exciting to make a save of some kind. A freaking fighting chance.

Anyway, I’m going to have to take the time to better understand these higher level mess-you-up spells for the next session for sure, so I can decide in advance if I want to nerf them or not.
Posted by Kevin Mac at 12:02 PM