Tegel Manor and my Return to “Gonzo” D&D


As a kid and most of my teens my D&D was all kinds of Gonzo. I used City State of The Invincible Overlord, Tegel Manor, and a variety of early Judges Guild products as my D&D wheelhouse. In those early days I did not give a damn about verisimilitude, and didn’t even know what the hell it was. Right out of the gate I think we were doing weird fantasy in our games by default, long before James Raggi used the term for his games.


But that was not to last. Just growing up made the gaming group increase the realism a bit, and once again as usual I put the blame for my own game world becoming more “real” on girls entering our gaming circles. Pretty, pretty girlies. Endless dungeon gauntlets and constant killing, combined with apeshit occurrences in-game that made little sense seemed to turn girls off. Role-play became a bigger factor then. The gals wanted to develop relationships in the game world. They seemed to respond better to things that made some sense, not just the weirdo whims of adolescent fantasy-minded boys. So in my game world shopkeeps and bartenders stopped being 10 level wizards or retired 9th level paladins. Magic shops began to become scarce. Dungeons existing for no other reason than to massacre adventurers became rarer. I stopped using Thor, Zeus, and other gods of myth and injected my own that made sense for my setting. Verisimilitude reared its ugly head. Thus has it remained over the decades. I kept an eye on things making some kind of sense in my world.


Well, I’m sort of getting turned around on that. I've had a couple of years off from running a regular D&D campaign, focusing on Sci Fi and other types of fantasy. After all those years of making my game world sort of low on gonzo, I’m getting a desire to go silly once more when I get back on the campaign track. Not that everything in the game world is going to go apeshit all of a sudden. But I want to have my main city stop being so much like Gondor, and go back to being more like Lankhmar. Weirdo shit around every corner. And my first step is to utilize the full gonzo nature of Tegel Manor. That setting will be the focus of my next campaign I think. Gonna make it MY Ravenloft! On a trip out of town the other weekend I actually got to test the waters with it outside my regular group a bit. That taste has me ready to go full bore with the wacky, brutal mansion on the gang in the not too distant future. Oh, of course I will try to throw a little gravitas with it in the form of better explanations of why certain things are the way they are, but Tegel seems the perfect way to hit the group over the head with my new gonzo outlook.

Really, life is getting too short for obsessing on verisimilitude in a game of pretend.

Walking Dead still not doing it for me 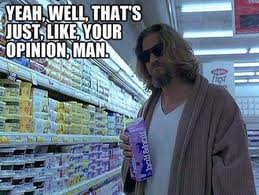 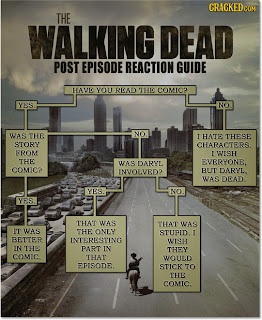 Read this comment in a (non-gaming) pop culture forum today, and it sums up my feelings on the episode last night.


"None of the deaths had any impact. It felt like a show in panic mode, thinking everything sucks so they have to kill a bunch of characters off. T-Dawg getting replaced by T-Dawg II is hilarious."

The writing is just god aweful. Things like the Guv'na's easy wipe out of trained military men (we know by now that in real life, such as in the middle east, panicy soldiers shoot first and ask questions later) last week is a big deal breaker on its own. Just another example of things happening because the writers need them to happen, like The Joker in The Dark Knight. I hate that kind of writing.

Michonne is an interesting comic book character, but in the reality the TV show presents, she seems really out of place. If this was a movie she would be the main hero and everybody else would be supporting characters. She is also mostly portrayed as smart and savvy, but she seems to put all her cards on the table by questioning the governor about the soldier encounter. More poor writing.

I know it's TV and writing often sucks on even decent shows, but damn. I guess I should not watch really good shows before watching this. This last weekend I finally watched the first few eps of Homeland. That is MUST watch stuff. Writing and character development is off the hook. From now on I won't be catching WD in it's time slot. I'll be catching up on it On Demand later in the week while doing other stuff I think. Nothing about it is must watch to me, and I don’t think it’s going to capture the magic of that pilot episode. If this is the best they can do, then it’s all downhill from here. I really don’t care what happens to anybody. This is in stark contrast to other great shows, such as Breaking Bad, where each and every character is full and interesting, even mundane ones.

And as for Talking Dead, they really need to stop having producers as guests. They suck the friggin life out of it. They never have anything to add. The moronic Chris Hardwick constantly asking questions he knows they will not answer. And the actors usually suck too. Most actors need really good interviewers so as to not come up forced and hammy. It's at it's most fun when geek comedians such as Patton Oswalt are there to add a little color (although Drew Carey was a total dud).

I was so excited the other year when I heard about a zombie TV series being made. But it turns out for that to be good and outstanding they need compelling characters and strong writing, which this show totally lacks. I really wish they could have done a show based on Max Brook’s World War Z, using clever filming methods to stay on budget. What a great, international anthology series that would have made. A different story and setting each week or season. Dare to dream.