Cup runneth over - but not Full 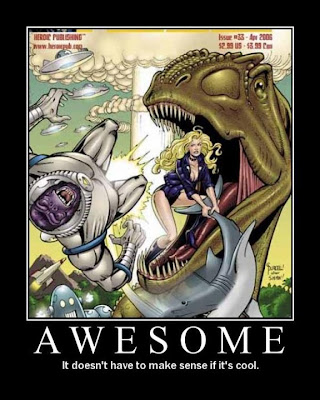 Look at that great action scene from Herioc Comics in the pic above. Isn't it just bugnuts amazing? A blonde babe in black leathers, standing in a T-Rex's mouth, smacking a gorilla in a space suit with a great white, as Ed Wood-looking flying saucers float about.
Reminds me so much of my old Champions campaigns. No, really. Dinosaur rampages during unusual great white shark migration as alien apes attack a major city. And hot super babes? Oh, you bet. Over the decades my female players would not always have beautiful characters in their D&D, but in Champions they were all Baywatch circa 1996. Ah, the good old days.
But shit, I'm running an old school Gloranthan Runequest campaign and a Call of Cthulhu campaign at the same time. I posted over the years about how I would really love to do these campaigns, and here I am now doing them. I have my players loving my currently hiatused KOTOR campaign, and they also often ask about their high level characters in my 1st ed. Ad&D campaign (been more than a year now I think for that). So why do I pine for Champions? Why do I wish I could run this crunchy system and my awesome futuristic comic books setting?
Because I am a gamer, and true gamers are never satisfied. There are so many games to run (including multiple settings and time periods over several game systems, such as CoC for Ancient Rome and Victorean London), I'll never get to them all. I know I should be happy with what I am having fun with at the moment, and I really do. But the daydreaming man, the daydreaming. It'll get you every time.
A little Chivalry and Sorcery, anyone?
Posted by Kevin Mac at 3:06 PM No comments:

Were the Steading Giants Just a Family Having Dinner? 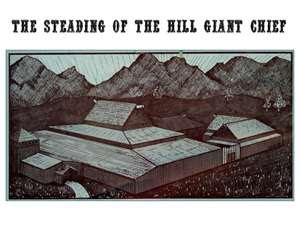 You know, since James over at Grognardia switched to his new comments format, I have not been able to leave a comment (forcing me to comment here about things I see there. That’s right, ToD has become a Grognardia commentary blog).

It’s a blessing in disguise really, because my comments online sometimes get me into trouble. I’m a nice guy, but when it comes to some of the things said on forums and comments sections (I really do need to stay away from these “think tanks”) I often react snarkily when presented with a comment that seems to come from an unfathomable place. It’s one of the reasons I’m doubling my efforts to stay away from most of them. But I do still read Grognardia, and James latest post is about the perennial fave, the Giants series. I’ve been planning to use at least part of it for the occasional high level 1st edition game (my last campaign, Night Below, left off with PC’s around 9th level) in the future, so have been revisiting it. I love the Hill Giant Steading especially. But one comment in the comments section really got my goat. Here it is in part:

“…Have to say I don't care for the G series or for any of the tournament style modules published around the same time. In G1 you have a bunch of giant sitting around eating dinner and the PCs have to break in and murder them all. It's more of an assassination mission than any heroic quest I wanted to be involved in (even as a 13 year old). Maybe that's because I view giants and just big people rather than monsters that need to be slain like manticores or carrion crawlers…”


WTF? To be fair, it was mentioned clearly (not sure of the exact wording in the module, because I don’t have it at work) that these giants were using a base of operations (the steading) to raise hell in the peaceful farmlands and villages. Stomping old ladies and drop- kicking household pets into orbit. That dinner they are eating is from the larders of destroyed farmhouses and family dwellings. And the orcs and ogres were probably eating the families from those villages.

It's not murder. It's war. Saying the giants were slavers, kidnappers, and murderers that needed to be dealt with (and what are you going to do, handcuff them all and put them in jail?) is about right. Plus it turns out that the giants are involved in a major conspiracy and secret war of an underground race of cruel and evil beings. I'd say the characters who attack the joint are pretty heroic. Bosh on this "leave the giants alone at dinner time" nonsense. You get in there with your high level characters and take it to the grill of those big Em Effers.

When I discovered the online gamer community a few short years ago, I noticed (especially in places like rpg.net) a certain type of gamer who has a sort of “new age” attitude about monsters. A sort of orc-hugging, soft-mother view of non-humans. I’m not heartless, and can understand that is the type of D&D they want to play, and that’s fine. I had a girlfriend when I was a teen who was the daughter of hippy parents. She loved to play D&D, but once actually broke into quiet tears over all the monster slaying involved. But for me, most monsters are not misunderstood. They want to kill you, eat your children, and steal your stuff. Orcs and Ogres are pricks! And those damn giants in the steading deserve the beating of their lives for their atrocities. No regrets!
Posted by Kevin Mac at 11:33 AM 8 comments:

I Hated Stories in my Game Mags

“…Your humming has summoned up a pair of mud ghouls, Lute!”

Over at Grognardia today James mentions some pulp fantasy fiction in Dragon Magazine back in the day. I had an immediate thought I wanted to comment upon there, but rather than lay a negative on his blog, I will do it here where it belongs.

I HATED that shit in my magazines. Short stories featuring some fighter or barbarian or thief or another. The Dragon, White Dwarf, The Dungeoneer…whatever, I hated it. They could have been the greatest stories ever told for all I knew. I didn’t care, I rarely read more than a few paragraphs before turning away to look at the Anti-Paladin article or whatever for the thousandth time. I didn’t care if they were good; if I wanted to read fiction I would get a book or Argosy Magazine or something.

Tables, charts, rules clarifications, character class and alignment articles, and even comics. These were fun to read and you would read the same entries again and again, and a thousand times again. But the stories. Ugh. Who read these more than once?

I more or less stopped buying game mags by the late 80’s, but I did pick up the occasional Dungeon magazine in the late 90’s, and they seemed blissfully free of amateur fiction. I hope that is still the case today, especially if I get a hankering to buy one.
Posted by Kevin Mac at 11:36 AM 4 comments: 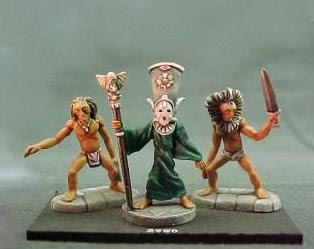 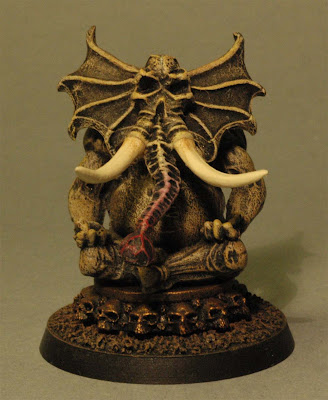 The party had gone to the a secluded portion of the New Jersey Pine Barrens in search of a missing anthropology professor and one of his students. The prof, from New York University, was looking into tales of the existence of a displaced tribe of Tcho Tcho people (an especially nasty cannibal tribe from Burma) near a small ghost town originally founded by German immigrants who for one reason or another imported the Tcho Tchos. Some decades ago the Rosens died out, but rumors say some of the Tcho Tcho’s still exist.

The party spent the first night in a mostly intact barn, looking over some weathered notes the professor had left behind. In the later hours the Tcho Tcho chanted from beyond the treeline, and threw rocks at the barn. Next morn, the group discovered a tunnel leading down in the ruins of the old house, and descended to find a short maze, and eventually some kind of worship chamber filled with human bones, and huge statue of the Tcho Tcho diety Chaugner Faugn. Also there was a prone figure, and it was alive! It turned out to be the student assistant of the professor, now emaciated and his face mutated. His nose had become long and probiscan like an elephants, and his ears were fanning out in mockery of an elephants ears. All sure signs of complete domination of Chaugner. He begged to be killed, lest night falls and he comes for them to kill them like he did the professor. The party would have none of it (all mostly good souls), and decided to carry him out and eventually to a hospital.

And here is where all Call of Cthulhu characters who carry big guns try to prove they have balls. As the others were leaving, Roland Smythe, the big game hunter, took a parting shot at the big statue with his elephant gun. To his shock, it turned instantly into a living, roaring Chaugner Faugn, and loped off its base to chase Smythe. The group, terrified and party split up, plunged into the small maze area while Chaugner battered around trying to seek them out.

Luck rolls and intelligence saved the day for them, as they escaped the underground tunnels into daylight. But Tcho Tchos armed with spears and bone clubs (and a couple of old swords) waited, with the masked and robed shaman. The party managed to fight their way out of the village area with only modest wounds, and hiked the 5 miles to the main road and escaped.

All that leaving out much of the detail, but suffice it to say it was a great session. We have already had a couple of games so far, but this is the one I think really blew the players away and got them honest to god terrified during the underground incident, with the added bonus of a thrilling fight with cannibals, and a hectic escape. The players really seemed to have a great time with this session, and I think I have them hooked.

This happened in the early 90’s with one of my old long running groups. My regular players hemmed and hawed when I suggested a 1920’s horror game (I don’t tend to get players with a lot of experience with HP Lovecraft), but within two or three sessions are just eating it up. So I was confident the current gang would love it as well. Man, that’s the power of a good Call of Cthulhu session.

As I wanted to get back to a little more Runequest (sans Strike Rank), I’m thinking this Chaugner Faugn encounter would hold the group over so I can get back into a little Glorantha goodness. Then back to CoC, and we’ll see what horrors that nimrod with the elephant gun brings down upon them next. Smythe!
Posted by Kevin Mac at 1:48 PM 1 comment: