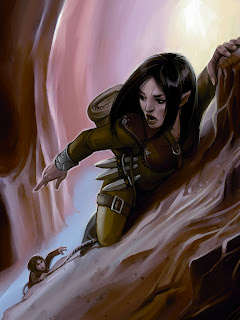 Over at Grognardia this week, James M. blogged about keeping track of time in his classic D&D games for Dwimmermount. As James is trying to evoke the earliest form of play, he goes with all the big tropes, from 10 foot poles to hirelings and henchmen. The very much wargame inspired methods of time tracking in OD&D include specific periods of time that it takes to explore a hex in the wilderness, or explore a dungeon level.

I scratch my head when I think about why anyone would need anything but their own perceptions. OK, maybe I am in tune with my long-time gameworld more than many others, but I think anyone can figure out that “OK, it has been a couple of hours so it’s midnight now”. You know, if a thief picks a lock then it probably took just a minute. If he fails and needs a second roll, then have an hour go by. I think that everyone should be able to judge the time passages no sweat, and the only major consideration is how long the players want to set up camp for the night.

Dungeon exploring may be more difficult than land travel. I mean, everyone pretty much knows a man can walk 20-30 miles in a day, and a horse at a steady pace might take you 50-60. But those original editions, again, go the wargame inspired route of things taking specific periods of time. The book might tell you that it takes a half hour to search a 10’ section of wall for a secret door, or that searching a large chamber takes so many hours. But why the need for such precision? I know we ultimately have to know a day goes by so Joe Fighter can get a hit point back (give me a break, most PC’s have fairly cheap access to clerics and potions, so what fighter lays around for two weeks trying to heal those 14 points?). Yawn. Let’s face it, precision is not always fun (why I was not a big wargame fan).

Take it from me, 120 years of player continuity has gone by in my game world. Tracking time is no big deal. Have a calendar, have a few holidays, and you are set. Do it all in your head. Make a slightly imprecise decision. You’ll have more time for the stuff that is really fun!

Let me admit now that I do take time seriously in the game. Having a little bit of perception of it goes a long way in bringing color to your world. You don’t need a chart or a table, you can figure out the basics of “little time,” the day to day activities of the players in your head. If a player complains because it suddenly matters, then retcon things slightly to make up for it. No biggie.

Much to the chagrin of some of my players over the years, I love to have time go by. It seems more real, and it adds a lot of gravitas to your world. In between campaigns, I like characters to be doing something else for a few months here and there. Settle down a bit, open a business. No end game there though, when the call of adventure goes down, they get sucked back in.

I’m notorious for having years go by in my games when a group ends. Whether some of the same people or almost all new, I’ve had maybe 6 or 7 major gaming groups since around 1990. If it has been a year or so since I ran a campaign, I like to have anywhere from 1-3 years go by in the game world. Gives me a sense of cosmic motion. In this new campaign of mine, started several years since my last active gaming period, I went ahead and had five solid years go by. Yep, my game world is getting old (hence, 120 years of character continuity). It just feels like the world has more weight if I do it this way. Hopefully this new group will last a year or two though. I’m not in a hurry to have another fiver go by.
Posted by Kevin Mac at 3:29 PM 2 comments:

The game that doubled in price overnight 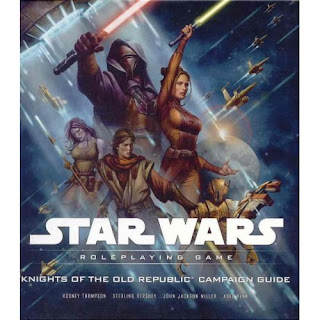 Earlier this year when I agreed to do A Knights of the Old Republic game in the Star Wars Saga game, I picked up the core rules, and of course the KOTOR campaign guide. Both were around 40 bucks, and I managed to get both for close to 30 on Ebay in great shape.

I heard rumors a week or so ago online about how the KOTOR book was suddenly super-rare. A couple of the players at my first game Sunday mentioned it as well. I just looked on Amazon, and it's going for nearly 100 bucks! Dang.

What would cause an RPG supplement to go critical so fast? I dunno, but it's popularity may be helped by the fact that the XBOX game from years ago is still popular. I considered getting this sourcebook a year ago anyway, because I loved the video game so much and really loved the setting.

What other game books have shot up in price so fast? I got 60 bucks for my 70's copy of Bunnies and Burrows a couple of year ago, and that was almost 30 years after it went out of print.
Posted by Kevin Mac at 6:23 PM 6 comments: 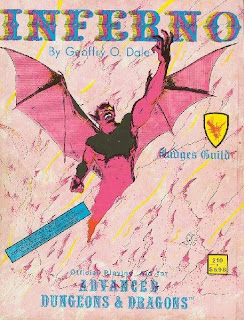 Written by Geoffry O. Dale and released by Judges Guild in 1980, this was one of my favorite modules I hardly ever used. Described on the back cover as an adventure you can use if a high level wizard tells you to "go to hell" or a cleric put a geas on you to steal a demon lord's magic item, this was an an area that only high level characters should tread.

On it's own, the module is a great read, full of the type of atmosphere that Dante's hell tends to conjure up. Just like in The Divine Comedy, you start out in a dark, lonely forest. Although there are no set encounters here, you are filled with a sense of dread and terror. Wandering down the trail, you will eventually find yourself at the gates of hell, and that is where the fun begins.

There is no great narrative, and the areas and encounters you have can be placed in front of the players in any order you choose. I always thought of it as more a sourcebook than an actual linear adventure. Besides various demon lords, you can meet a host of demon and devil servants, undead, and lost souls. Tiamet, Queen of evil dragons, has a cave lair in hell, and it is chock full of glorious treasures and artifacts. You can sail down the river Styx with the boatman, gazing with horror upon the polluted and foul water of the river, and the atrocities and suffering that goes on along it's putrid banks.

I never really had a place for this in my regular game world, but I did use it for a mini-campaign I was running in the City State of the Invincible Overlord (a rare series of sessions I ran with characters starting at 10th level). But a good indication of how much I loved a module in my teens and in my 20's was how long it stayed in my bathroom magazine rack. It was there for almost a decade!

I Ebayed this book several years ago during one of my game materials purges, and it is one of the game books I wish I had again to give it another read. Sure, like a lot of Judges Guild items any DM with decades of experience should be able to come up with a similar adventure setting off the top of their head that would suffice. Still, who needs to come up with an adventure they will never run? I just want to have another read of it to bring back some great old memories of an old school module I wish I had the chance to get more use from. It was really one of my faves.
Posted by Kevin Mac at 5:53 PM 2 comments: