Thieves Tools hard to get? 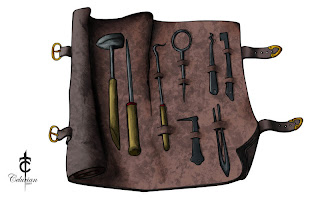 I’m seeing some conversation going on about the availability of thieves’ tools, and that suddenly had me scratching my head. Yet another case of gamer over-think? Somebody suggested that you need to go down to a thieves guild to get such tools, and perhaps even pass a test. Another says you risk drawing undue attention to yourself by trying to have them made or buying them.


Really, does every little common thing have to be turned into an adventure? This is the minutia some DM’s are focusing on?


These tools aren't some elaborate, almost magical mechanisms from far away lands. Any locksmith will have such tools to ply their trade (I mean, somebody makes the locks, right?), and perhaps their shops even sell them for apprentice locksmiths. They won't necessarily raise an eyebrow at some young lad buying them ("I'm a locksmiths apprentice, sir!") Should not be hard to pick up, and going to a guild should not be required. I would imagine they are available enough that it would not be some kind of thieves test to obtain them. Unless you consider going down to the weaponshop to buy a sword some kind of test for a fighter. If you got the money, you should be able to buy them and get on with the real adventuring.