Alignment: great role-playing device, or pain in the ass? 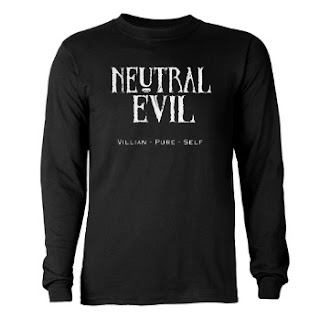 Although I never really used alignment languages or any of the stranger alignment tropes in my 1st e. AD&D games, it still has been an important part of my scenarios. For me it is a great device to get players role-playing, and this more than anything else is where characters tend to have a great variety of personalities, but each must subscribe to certain parameters of behavior. And really, it is part of what makes D&D what it is.

It seems like a minor thing at first in my games, but a player new to my style is often surprised at how seriously I take it when it become an issue. And it became an issue in my game this weekend.

In a nutshell, a chaotic good bard (not classic D&D bard, but one of my own creation that had more to do with music) moved to finish off an evil female half elf spellcaster whom had been (or at least appeared to be) defeated. She was cut-up and had been stung for a few rounds by a druids summon insect spell, and a young female fighter player character had picked her battered body up in her arms out of pity. The bard (also a half elf) was rabidly trying to run the still body through with his longsword, while the female fighter moved and defended to protect it. The fighter put down the girl, and stood her ground as the bard continued to try and attack the prone figure. The girl (apparently) died, so the situation was rendered moot.

OK, so keep in mind that the enemy was a complete bitch, and a thorn in another player characters side for many years, but the bard didn’t know that. He had never heard of her nor fought her before. He only knew that she was the enemy, and that she was a spellcaster. In my opinion, the character was being played with player knowledge as opposed to true role playing, and that is really one of my pet peeves. I’m always surprised at the shamelessness at which many players do this, but that is probably a subject best left to another post.

So the issue for me is: do I have this chaotic good character make an alignment change to chaotic neutral? I always give one free alignment change in a characters life before they get penalized for it. For me, outside of just trying to kill the character later, the only real punishment would be a forced alignment change.

Also somewhat less under consideration was the characters past actions, which were not exactly laudable. Besides often just seeming like a jerk in general, the bard has seduced young women and ignored them the next day (I think the player’s comment then was “why would I talk to her today, I already screwed her” – nice). OK, not really evil, but we aren’t trying to make him evil just for that, or even for trying to kill a helpless enemy. We are talking about not letting him have the term “good” in his alignment description.

I posed this quandary to a chat thread today, and got a very mixed response. Even since the early days of D&D, everyone had their own idea of what is “good and evil.” It is the same today. Here are some comments:

*…Oh, neutral rather than good in any case...However, I wouldn't say that it warrants an allignment change- yet.You can be a real asshole and still be 'good' as long as you are working to benefit society at large before yourself (well, mostly in any case...)Now if he had succeeded in killing off a helpless target and showed no signs of remorse, switching to alignment to neutral might be in order…*

*…Those poor victimized women in your games... :PHow do they normally handle fallen foes in your game? If that was an orc that had taken a hostage and the PC wanted to kill it after it was knocked out, how would you handle that? In your campaigns, do defeated-but-not-killed enemies tend to stay cowed or do they find a way to get back at PCs later?...*

*…In my experience, when everybody but one player (player and PC) wants to not kill an NPC, and that player (player and PC) decides to try to kill the NPC anyway, and it's not something that's discussed out-of-character or anything first, that player is a fucking asshole and will ruin your campaign. I've had this happen to me TWICE. If I ever see another player try it, they're getting kicked out on the first offense, since I warn at the beginning of the campaign not to do this shit. These have only been strangers I've gamed with that do this shit, and they keep doing it after being told repeatedly before and during the game by the GM and all other players that it's not cool and that they should make characters that don't do that kind of thing…So yes, alignment change at the very least. Even if his character had some kind of knowledge that the others didn't, a good-aligned character (regardless of being chaotic) would explain and reason with his friends before trying to traumatize them by murdering a prisoner in front of them (and possibly fighting them as well.) I'd probably ask the player what his problem is and if he perhaps noticed that he's pissing off other players and the GM…*

*…I'd ask the damn player. I mean, seriously. "Do you perhaps want to play a neutral character, or did you simply not think the situation through?" Also, I'd point out that as soon as you decide killing people is acceptable for characters with "good" alignment, whether they're unconscious or not is really just quibbling over details…*

*…This does sound like CN behaviour. But I would always ask the player before doing something like that to them.CG: "Hmm. Guys, this bitch just tried to magic us in the face. If we hadn't knocked her out pretty much by accident we'd have killed her without compunction. What are we going to do with her? We can't stab her where she lies. I say we let her come round, point out how easily we beat the crap out of her and tell her to skip the country."CN: *tries to stab evildoer, is told not to do that* "Hey! She'd do that to us if she had the chance. Are you guys really trying to take her as a slave? Can we even afford to keep a slave? *pause* Oh, you're trying to redeem her, or something. OK, but you have to feed her and clean out her cage."CE: *tries to stab evildoer, is told not to* "OK, no problem, but she *is* a caster and so we probably can't meaningfully take her prisoner without muzzling her. Tell you what, I'll cut her tongue out. We can always have it regrown if we need her to tell us something."

Out of all of the replies, I think this one is the most along the lines of my thinking. If the battle is over, there is the luxury of thinking things out for a minute. If your thought process is “fuck the wait, let me stab this bitch” then you are for sure chaotic, but should the term “good” be majorly applied to you?
For me, and my world, it is hard not to think of acts like putting a helpless enemy to the sword on the battlefield, or later cutting out somebodies tongue, sounds more like things a chaotic evil character would do over somebody who says ”hey man, I may be chaotic, but I’m good!”

I just don't think you can put helpless women to the sword (enemy or not) and have "Good" be in your alignment data.

The majority of players are of the "born to fun, loyal to none" attitude, but just because a lot of players and DM's prefer to have their worlds awash in amorality, you can't sell "good" short. Not black and white good and evil, but I think most of us here know the diff. Just because a society or individual thinks raping little girls and drop-kicking babies off cliffs is an acceptable act (Khmer Rouge thought they were doing good), we still need to have established opposites if we are going to use alignments at all. Players should not choose an alignment lightly.