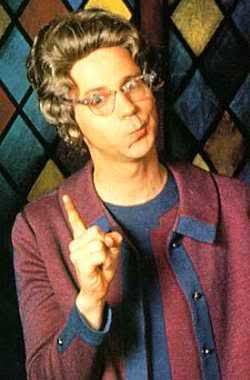 Obviously if you’ve read a few of my posts from a year or so ago, you know that I am no stranger to “mind altering substances” at game time. With my love of brewed liquids (and I ain’t talking coffee and tea), the title of this post is obviously a ruse. These days I enjoy several ales during the games I run, with Bass Ale, Fat Tire Ale, and Blue Moon being current favorites (all usually on sale in 12 packs at your local Rite Aid store). I know this sounds like a lot to you, but I am over 6’2”, currently built like a Samoan, and for sure ain’t no momma’s boy Sunday drive drinker. Although I have cut down lately so I can chop down that Samoan build 5 or 50 lbs, my years of practice give me a certain amount of tolerance. And for sure when driving from a session I’ll knock it off around an hour and a half before ending the game (I privately refer to this as “Engine Cooldown Period”), and often take a walk a few blocks to shake the mist out of my melon. Maybe grab a vitamin water at the local market before heading back to the car.

Almost everybody in the group but Big Ben (total tea totaler – although now that I think of it I don’t think he even drinks tea) enjoys a few drinks. Dan Dan the Power Game Man almost always has a sixer of Rolling Rock he’ll suck down 5 of. Andy, fairly slight of build, like 2 or 3 ales. And little Ben often has a tall can of something. Paul is not much of a drinker, but a couple of times has brought along a few Jack Daniels Lemonades. Our lady player Terry likes a couple of ales as well.

And as you may know from past posts some of us like to smoke a bit of the pipeweed before the game and maybe during a break. The fact is I would probably do this more, but during the game sometimes if I step out on the patio for a quick inhale Dan will come running out thinking it’s a chance for a cigarette break, and this can cause all the other little penguins to come waddling out to see what the fuss is and take part in whatever substance they prefer. But for the most part I would not say that anything is getting used in excess. If I am getting a ride, I might drink an ale or two more, but nothing crazy or shameful.

So sometimes I think about gaming, and how for the most part my experiences outside of the group have been fairly sober. When I was running KOTOR sessions for an established group of middle aged Star Wars dorks in Hollywood the other year, it seemed like at least one of them was a beer drinker but did not do it at the table. So I ran those sessions, that were already treated like I was working for these guys, stone cold sober. And that was one place I really felt I could use a few drinkypoos, being surrounded by what amounted to very weird and ultimately unfriendly creeps. At another session I went to last year, the host made it very clear to anybody that was playing that no substances, alcohol included, would be tolerated. And hell, in that case, being a fairly mellow and happy drinker (much nicer guy than sober me) things might have worked out differently if I had had a couple of belts when something unpleasant and unfriendly ended up going down. I just might not have walked out of that game less than an hour into it, which I don’t think any DM worth his salt wants a player to do.

I’ve had a couple of nice drinky games outside the main group the last year or so though. At last year’s Socal Smackdown con I had brought a little cooler with some beers in to get me through the session, and Cyclopeatron who was in attendance even hit me up with a nice rum and coke from the hotel bar. And earlier this year Cyclo organized a little pub game in Anaheim (or was it Fullerton?) with me and Trent Foster running our early sessions, and I had quite a few pints in that one (full tab for me and my driver Terry’s drinks? 90 bucks).

But one of my attendees at the Smackdown Session, Gary his name was I think, asked me to run some sessions at his place for some people in the future, but that no drinking of any kind would be tolerated. Needless to say, those games never panned out.

What is it with the drinking hate among many gamers? This is not a new phenomenon. In the 90’s, when I was running games for a group of mostly women in the latter part of it, those were some smoke and tequila soaked gaming. But each and every person there parties. And not falling down drinking. They were several hour weekend sessions, and we would do a shot and a toast from time to time. Well ok, I was putting beer in that mix too, but I lived a 15 minute stagger away so no big woop if I was feeling pretty wet on the brain by the end of the session. Hell, I was a much younger man then. But I also remember going to some games in the area on a Friday night some guy was hosting in the late 90’s. . These were terrible games, with a GM who kept no notebooks and totally made things up, badly as he went along. But I stuck with it because I think I was low on players at that time and was sort of trolling one player he had who I felt was a right fit for my group. But by game two I was bringing a six pack along to dull the pain and boredom. A couple of games later I was alone with the host working on some GURPS character for another game, and when talking about drawbacks for a character, disabilities or whatever they called them in that system, he made a big point of telling me alcoholism would be considered a weakness, and that he personally was creeped out by it. Ah, I see. My sixer on a Friday night habit was freaking the boring little douche out. I think I was done with that group at that point.

What do this people think is going to happen? Am I, or anybody else who wants a few refreshing adult beverages, some kind of old west Indian savages who will go nuts and kill the whole family if we get our hands on firewater? What’s the deal with that?

You only have to read a few threads on Dragonsfoot or RPG.net to see that there are drinkers out there in the game community. But that seems to be not the norm, and for the most part gamers are some kind of dorkish prudes who see it as evil. They probably would even see drinking half a Near Beer as some kind of pathetic persons personal struggle with Satan. I don’t get it. If you have kids, then I understand not wanting smoking to go on around your property. But a few beers? What is the real harm? Would these people see prohibition come back to save all the poor sick souls who enjoy a handful of suds during a several hour sit down were pretending and mind expanding seem to go hand in hand?

I myself would not want to run a game on mushrooms or acid or have players doing so, but I think that is a far cry from a little alcohol. Nobody is going to come to your game, have a few drinks, and wreck the place. They aren’t going to offer any to your kids (if you have kids why are you having weird strangers over to your place anyway?). What the hell is the real harm here? Stick up the ass may be the best explanation I can come up with for each and every time I have encountered anti-drinkers in the gaming scene.

Catwoman and The Princess Diaries 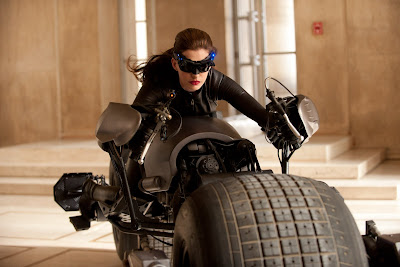 Here is a fairly solid pic of Anne Hathaway (Princess Diaries, Get Smart, shitty Oscar hosting gig) as "Catwoman." She be looking like she stole the Batpod, Jack.

I say "Catwoman" because, just like Harvey Dent was never referred to as "Two Face" in the last film, she will probably be just a cat burgler named Selina Kyle (although you can count on her action figure being "Catwoman"). It's Nolanverse, so there won't be any dead Selina Kyle lying in an alley being licked back to life by a bunch of cats in heat.

Oh, there have been plenty of pics released of Bane, one of the villains from the film. You can find those all over the place, but they are fairly underwhelming. In some pics, Bane seems to have possession of several Batmobile Tumblers. This and the Selina Kyle Batpod pic would have us believe that in the next film Batman has forgotten to lock up his toys. 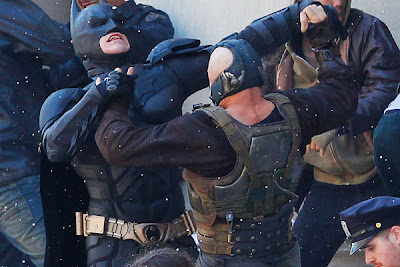 This post over at Grognardia reminded me how much better a lot of the expanded universe of novels, video games, and comics were than the "hands on" work of George Lucas himself. Much of the talent working on these other non-movie aspects of the SW universe were fans of the material, and it showed in loving ways more than The Man himself. They "got it" while the master had "lost it."

Case in point. Several years there was a Clone Wars cartoon (not the odd looking one they have now - talk about "uncanny valley") miniseries that really got it right. Bad ass Anakin and Obi in mountain-shattering combat with Sith agents. Clone Troopers having their own piece where a group of them find themselves in a sort of Black Hawk Down situation where they show more skill and action than any of the movie clone warriors did. And best of all, they gave us a frightening and powerful General Grievous. Not the wheezing, slouched cyborg clown with the bad Dracula voice. Take a look at this clip if you haven't seen it, then tell me which version of Grevious is cooler.