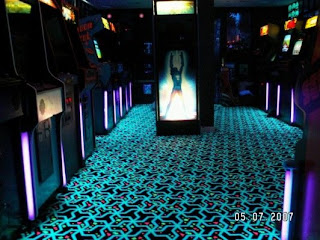 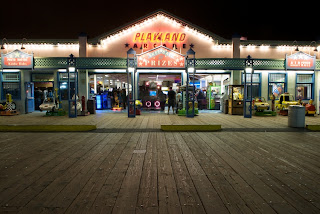 I’m sure that like me you occasionally catch the whiff of some smell that takes you back to some bygone era. Maybe something reminds you of a favorite dish you loved as a kid, or perhaps you detect the scent of some perfume or incense that reminds you of a teenage girlfriends bedroom. Such a little thing can take you right back there, and it is sometimes profound.

Today when I came back to the office after a lunch break, I hit the small room in the parking basement to catch the elevator. I’ve been down there a million times, and it is usually pretty odorless, unless one of the asshole chain smokers from the internet company on the 2nd floor had just passed through after a ciggy break.

But today I got hit by a smell as soon as I entered, and as I waited the 30 seconds or so for the elevator, I realized that this odor was exactly like the one I remember from arcades in the 80’s and early 90’s. I don’t know if it was new carpet, or just some kind of cleaning that creates it, but this just popped memories into my brain that was decades old.

Man, arcades. As a teen and in my early 20’s, my friends and I spent a lot of time in them. Often one of us would be playing Berzerk or Pacman, and the others crowded around would start singing some song from our then favorite film, the Heavy Metal movie. There you were trying to navigate around enemies coming at you from all directions, while your ears were assaulted by Cheap Trick – “don’t be afraid to drive the nail in the wood, or drink the bottle it ta-tastes so goo-ood. You go the distance, you never thought that you could…”

In later teen years we would go more often with girlfriends, but that was never quite the experience you had with your pals. With your gal you had to play Burger Time or Q-Bert or some other lameass game (OK, I kind of liked them). Hell, when you were with the girl you didn’t even skateboard to the place. You fucking drove there. Talk about the end of childhood.

I don’t really remember that last true arcade I regularly went to. I think sometime in the early 90’s there was one near Century City, but that was the last classic, carpeted arcade I remember. Oh, I’m sure Disneyland or some other place I never go in adulthood might have something similar, but I doubt it. I’m thinking about the common, carpeted, arcades that were one big room in a building that was formerly probably a furniture store or some such.

In the late 90’s during one unemployed summer, I’d give myself a 5 dollar limit and cruise down to the Santa Monica pier arcade (pictured above). It sure wasn’t carpeted, and it smelled more like Santa Monica bay (a fishy, tar smell at that time – it’s less polluted nowadays) mixed with hobo power B.O. But it was my last regularly visited arcade. It’s still there, but the pier is just too touristy now. I played a ton of House of the Dead that summer. I loved that game, and I was no fan of stand up shooters. Too bad Uwe Boll fucked up the movie version, which should have been a no-brainer (agents in suits blasting their way into an undead hell house. What’s so hard about that?).

My last game there was probably around 2001 or so. I stopped in and House of the Dead was gone. So I poured a few quarters into the current Street Fighter game. Eventually some Mexican dude came out of nowhere, dropped a quarter in, and proceeded to beat my unskilled warriors ass up and down the screen. I don’t know the protocol on “join in” games, but I was kind of irked. I was new to the game, and wanted practice. I think I said something derogatory, along the lines of “chupa mi pinche verga cabron,” and just walked away, leaving poor Guile or whoever to be helplessly massacred by Juan-Carlos. In retrospect, I should have tried to get some tips from the guy for my trouble. But I guess at that point I missed my 80’s arcade fun, with old teenage pal “Doc” Winslow shouting a Blue Oyster Cult song into the side of my head while I tried to operate Dirk The Daring.

Now, I love my consoles. I’m really digging Fallout 3, and so far have finished the game, but am still exploring via the Broken Steel DLC. But no arcade smell at home. Just the acrid smell emanating from a nearby empty beer bottle, and the whiff of shame for spending way too much time alone with that game.

“Reach out and take it

Reach out and ta-ta-ta take it

Reach out and take it, aw yeah!” 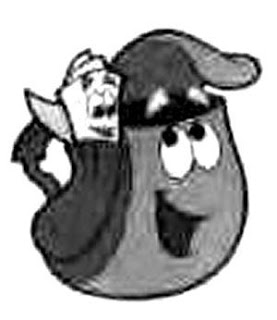 For those of us with a regular gaming group, one of our common problems is a player having to miss a session. What are you going to do? We have lives outside gaming unfortunately what with jobs, family, and non-gaming friends (Superlotto tonight – c’mon lucky numbers make me a full time gamer) taking up our time.

When we were kids, we didn’t really worry too much about why Varn the Vicarious was suddenly not present in the dungeon when we continued an ongoing crawl. Back then our go-to fix for this was teleportation. You teleported out of the dungeon. When you returned you teleported back. Sometimes this even happens in the middle of a session. Sometimes we said they teleported back to town. Sometimes to just outside the dungeon with the pack animals. Sometimes we didn’t even say where the hell they fucked-off to, and what power or entity caused them to do so. Needless to say at 14 we did not really give a rat’s patoot why this happened, because we were too busy busting Gnoll heads and getting poisoned by treasure chests. We did not care about verisimilitude. We didn’t even know what that was.

As we got older our role play become more sophisticated. Not that we became story tellers, but it suddenly mattered why your character was not present during important play. This is one reason I like to have a couple of campaigns of different genres going on. Sometimes a particular character just has to be there for one reason or another, and if you have other options you can wait for that scenario when the important character can be present. But in a pinch and the PC is not that needed, “personal business” fit the bill for why they are not there.

It works in fiction. Character come and go willy nilly. In The Hobbit and LOTR the wizard Gandalf seemed to make a career out of constantly fucking off on some personal errand, even when you needed him. It works especially good for mysterious types. Wizards, thieves, rangers, druids – these guys usually have their own agendas beyond the party. Even in the midst of level 4 of Deathtrap Dungeon, it is conceivable that these mystery men could come and go and not even feel the need to explain. Even a plain fighter can have an important side thing to do. Maybe a date with some red headed doxy he met at the 2nd level dwarf tavern.

“I must away for awhile, I shall return my comrades in arms!” they shout (or something less lame), as they flourish their cape into the air and march off into the darkness.
OK, it is not easy, and you of course still have to do a little shrugging and whatareyagonnado?-ing, but you do your best and move on.

But I was shocked recently to read a forum post about how to explain character absences. Seems a no-brainer. These guys all being adults (some quite old), I figured they had all probably evolved my “personal business” procedure when their players decided they would rather play Skyrim than get together for D&D. But to my shock and awe, people still seemed to use the childhood method of “he teleported out of the dungeon.”

Look, I know it’s all “beer and pretzels gaming” and all that, but I feel to avoid a board game mentality you need that role play and a little bit of gravitas. I mean, these guys even had “explanations” for the teleporting, like unlimited but limited (?) teleport scrolls, or it was a limited use ability the dungeon grants to you when needed (because shit, we all know dungeons are just like tough love soccer coaches who want you to succeed in the end). One guy even had the most unique reason for absence ever explained on this planet. The party had the ability to shrink a character down to an inch in height, paralyzed and invincible, so the party could shove that character of a missing player into a backpack and keep him safe as the crawl continues. Jeez. Even in a high magic world, that seems pretty Ronald McDonaldland to me. That breaking sound you hear is the shattering of any sense of disbelief.

No need for all that weirdo, gravitas-killing super magic to explain an absence. “Personal business” ain’t perfect, but at least it doesn’t sound like something my dumbass childhood self would use.

Does Gygax get too much credit?

I'm sure this has been discussed in the OSR plenty already, but I'm actually not all that well versed on the subect of Gygax and Arenson's contribution distribution. It sounds to me like, more or less, it is like a Stan Lee/Jack Kirby situation fron Marvel's Comics silver age. Jack did a lot of hard work on characters that would become billion dollar icons, but Stan was the "Funky Flashman" charismatic face of the company. Face front, true believers!

In this Cracked.com article, the Gygax and Arneson history gets a small, but biting, entry in an article about getting too much credit for things.Cracked is awesome in general, but seeing D&D make a significant appearance on one of the sites articles really got me jacked. Here's the meat of it if you don't feel like looking at it (although with lines like "...Gary was more like the weird uncle who lived in the garage and clogged the toilet" you might want to check it out). If this is all true, the Dave created everything I love about the game except the part about using dice.


Who Actually Deserves the Credit:


During a nerd side quest, Dave Arneson and Gary Gygax had an epic random encounter when they chanced to meet at Gen Con in 1969. Gygax was working on something called Chainmail, which was a war simulator only a bit more complicated than the average board game. With Arneson's influence, Chainmail was adapted to include:

- Conversations with imaginary characters (NPCs) to develop the storyline