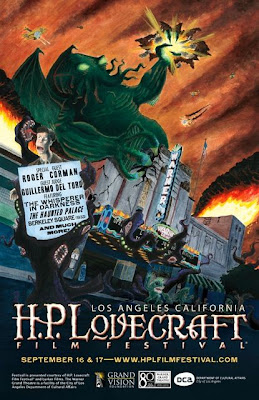 There should be more of these. LOTS more.


A goddamn Lovecraft fest going on practically in my own back yard (Redondo Beach). Guesting Roger Corman no less. And guess what? It's the weekend I start my several week run at the Northern Ren Faire, downing ales and playing world music. The only Old One's I'll be around are a lot of old hippies. Oh, and young hippy chicks. Yeah, that and the boozing in an Elizabethan village in the woods are why I'm going...

But if I was going to be in town, I'd be trying to get tickets to this thing.
Posted by Kevin Mac at 3:25 PM 1 comment: 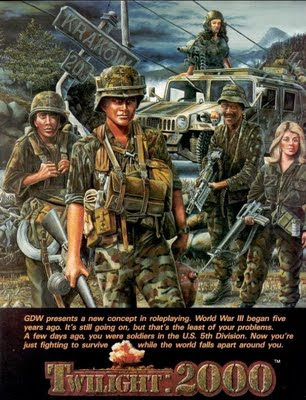 As depicted on the ad, this is straight out of a direct to video, 1980's post apoco film starring Rowdy Roddy Piper. "Hell comes to Frogtown" had a couple of decent women soldiers. But even Sandahl Bergman's hair didn't have this late 70's Playboy After Dark Playmate style. One of them looks like Farrah Fawcett. So is this so called "realistic" aftermath type game set in the original Charlie's Angels universe?

No soldier who wanted to live through battle would go into combat alongside chicks with big hair. If they were the type of women who wanted that kind of hair, then they were the type of women you had hidden in the bunker for "Comfort time." If the men go into battle with any women at all in the aftermath, they'll likely be more like the harsh, fugly women guards at Abu Graib prison were in those wonderful photos released a few years ago.

Maybe the women on the cover are actually men in drag. Soul "sisters" of Buffalo Bill dancing naked in front of the mirror waiting for Agent Starling to show up.

I know typical nerds often have a fetish for beautiful women who can kick ass like Laura Croft or one of the blond chicks from Xena. But anyone who thinks there is anything realistic about this needs to just play in the fantasy worlds and not live in them.
Posted by Kevin Mac at 10:51 AM 4 comments:

I made another one of my rare public appearances DM’ing yesterday at Socal Smackdown in Anaheim. Last year’s session was a big success, and the organizers (wanting more RPG events, especially old school) had asked me to run a game again. I was back and forth about it for the last couple of weeks, but having not a whole ton of other priorities for the long weekend I was leaning towards it. Earlier in the week a player from my regular group was interested, so I said “what the hell” and went for it. Last year I stayed at a cheap hotel near the con, but this time just travelled down there for the session

I did not have a lot prepared, and had not done OD&D since the pub game earlier in this year, but I dove in the last few days whenever I had a few minutes and tried to hammer out a scenario. I pretty much used my Tegel Manor Dynasty setting I did in the pub game; basically a prequel to full blown haunted Tegel Manor. This setting is sort of turning out to be my Ravenloft, a recurring locale with undead, demonic forces, family intrigue, and atmosphere. In a lot of ways I’m inspired by the old Dark Shadows program to give a living family angle to the cursed mansion.

Even though the con blurb did not mention me specifically, there were three people from my pub and Smackdown 2010 groups, so including regular player Terry it was not a total batch of strangers, which was nice.

It was really kind of a wild and wooly session, the 4 or so hours going by pretty quick. There was a bit of over the top dorkery from a couple players, but it was more funny than annoying. My sessions tend to be boisterous and filled with wild laughter. As a matter of fact, one guy who played another game at a table near mine last year and was playing in mine this year commented that he remembered how loud and fun my game looked, and how he wished he was in that session. And again, it was a success and very worthwhile.

I do have to say that campaign play is always going to be my main fun and focus. I just love having time for characters and situations to be developed through ongoing gameplay. For these more or less one shots (although this is the second time running the same character for both Terry and another guy, so I try to collect the character sheets at the end to keep them in case somebody plays again in the future), I just think in terms of several encounter situations and loosely tie them together. There isn’t a ton of time for sandboxing.

Anyway, I’m in my busiest time of the year now, so I doubt I’ll do another public session anytime soon. But it turned out to be another great way to spend one day of a long weekend.