Keep on Truckin' (more or less) 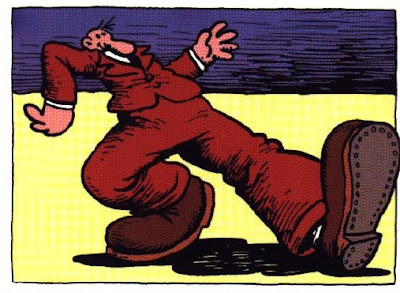 Wow, more than two weeks without a post! What the hell is going on around here? Actually, one big thing that is going on to sap up my “Funny time” is a big promotion at work. Career making. So to earn that nice extra chunk of change and the occasional invite to a big Hollywood client party now and again, I need to spend more time actually doing something productive on the computer, instead of all this frivolous, asinine game stuff that is unrelated to my actual playing of the games.

Also, with my long AD&D campaign now well over, I’m slightly less inspired to post about gaming stuff in general. Sure, I’m doing KOTOR and want to do Call of Cthulhu and more Champions in the future (and leave us not forget my current obsession Runequest) All this, combined maybe with my disappointment at how many less than fulfilling gaming experiences I’ve had outside my own group in the last couple of years (those great OD&D session at local events being an exception), in person and online, will keep me from posting very often for the foreseeable future. A lot of the negative crap I read online reminds me of those early Aero Hobbies days I had as a young teen at the local game shop. Exposure to a lot of bitter, unhappy people who seem to make up a huge portion of gamers (and maybe pop culture geeks in general). I keep getting sucked into stupid arguments with people online that I probably wouldn’t even acknowledge if I met them in real life. I gotta cut back on that for sure. Treat these people online who get on my nerves much like I do fucked-up shitty drivers when on the road. Think of them not as people, but as nothing more than blips in a video game comin’ atcha.

In gaming, I need to focus more on the actual gaming. Right now I’ve been playing every other week in Big Ben’s evil campaign, where I’m running a monk (the one non-evil character). That has been fun to a large degree because my guy came along after the first game, and this lot of evil punks were practically at each other’s throats. So my lawful neutral guy has brought some sense of order to the party.

In my game every other week, I’ve been doing the KOTOR thing and it’s a success so far. It’s based on the campaign I put together for the infamous Star Wars group I ran for a bit the other year. But the difference this time is I know these players, they are all pretty cool, and not one of them is even that much of a fan of Star Wars movies, which is a big plus for me. I’m trying to run anything but a Star Wars film with this. I don’t think the other group necessarily appreciated a little bit of hard sci fi and rated R situations being injected into their precious George Lucas setting. Yeah, it’s fun, with some great characters. The players are loving all the options you get for character building. I more or less dig the system (for Sci Fi…I don’t know how they could have called this game engine “D&D” at any point), and both Big Ben and Paul have PDF’s of the SW Core rules, and seem to know the system already better than I do.

For more changes on the game front, we are for the foreseeable future pretty much losing Andy’s place to play in after almost three years of playing there. But luckily, despite his wife just having a baby recently, Dan the Power Game Man has managed to sweet talk the new mom into letting the gang come over to play on weeknights there. Mulholland on a weeknight is a bit of a pain to get to from the West Side, but it’s good to know we still have a location.

So the games continue. My online presence, well, may be a bit less for awhile. I’ll still check in to post here and there when inspired, or pissed off by one of my players, or any possible number of things that get my goat or gets me excited (yay)in the grand scheme of gaming. I’ve really lost my taste now for trying to get involved in any kind of other groups outside the great gang of people I have now for our regular thing. Actually gaming on a regular basis. Seemed a far off dream around three years ago. I’m going to focus on keeping that healthy for as long as I can. For my gaming life right now, it feels like home.
Posted by Kevin Mac at 4:10 PM