Dive bars…always with the dive bars… 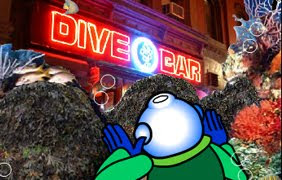 Whether it’s D&D (ok, those are “inns” and “taverns”), my futuristic Champions setting, Star Wars, or Call of Cthulhu, I always play the dive bar card. I’m not sure I ever did it with post apocalypse stuff like Gamma World, but if you ever saw Book of Eli with Denzel Washington, then you know those are great places for encounters/fights as well. I know from firsthand experience, because in the 90’s, especially when I was into darts for extended periods, I spent a decent amount of time in them.

It’s my go-to setting, because I can always get characters to spend time there. Often an entire session if I want. Have an interesting guy behind the bar, some mixed-economy patrons (there are always “yuppie” types who like to go slumming at dive bars), some ladies of ill-repute, some informer types, low-level criminals, and you have a nice mix of NPC’s to play with. Have a table or two with some open gambling, and frost the cake with fist-fight betting (cage matches or otherwise) and you got yourself a good time.

Players can chat to a lady of choice, get in on the gambling, or if they are the rugged type get involved in some nice punch-up play for fun and profit. My current group really loves my bar settings, and what was maybe going to be a very brief encounter often turns into the better part of the night.

Case in point: In the last Call of Cthulhu game, the characters needed to go to a lowbrow Hudson Bay dockside bar to find a guy who could lead them to a Ghost Town in the New Jersey Pine Barrens they needed to investigate. So after dealing with an attack from multiple byakhees (they have been stalked by a Chinese Business man since NYE who can summon them with an ancient whistle), they went into the bar for the usual bar fun.

Of course there was some fist fighting going on. It didn’t seem like any characters were going to get involved in it this time, until the young Turkish antique dealer grabbed Wing Kong, the young Chinese cook/martial artist, by the arm and sort of forced him into it. She is a brash young Turk, that girl is. Anyway, in the ring against “Slippery Pete,” Wing, who’s English is not so good, just dodged around confused while the guy threw punches. Wing Kong is the best HTH fighter in the group, and it was refreshing to me that he didn’t want to fight unnecessarily. But Andy’s old business man/’semi-hobo Michael (sort of an aged Clint Eastwood type) got up on the small dais and pushed Wing out of the way to take on Pete himself. After a devastating head butt and a good right hook from Pete, poor Michael was laid flat on the ground (this seems to happen pretty much every game to the poor old guy). Wing did not like that, and he got up to give Pete a thrashing with his five fingers of death (our young female Turk even tried to get a punch in). By the end of the evening, a group of international sailors were buying Wing drinks, and even Slippery Pete, black eyed and bruised, joined the characters at the bar.

I didn’t intend for the group to spend the better part of the game there, but these dive bar encounters just seem to have a mind of their own.

We have almost an hour left of the game, so we did manage to get them to the Pine Barrens, and a little bit of investigation into the presence of some Tcho Tcho people there. More on that, and a Mythos deity, next game.
Posted by Kevin Mac at 12:00 PM 2 comments: 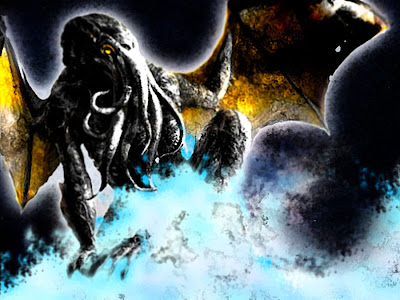 I'm currently reading the Brian Lumley book The Clock of Dreams, one of the Titus Crow stories set in the Mythos.

Lumley's stuff is from the "Derleth School" of Cthulhu Mythos adventuring. That is to say, Lumley took to August Derleth's imposing of a Christian-like "good vs. evil" mentality upon the Elder Gods and The Great Old Ones. Die-hard fans of Lovecraft took exception to much of what Derleth did, including such minutea as his coining the phrase "Cthulhu Mythos (Lovecraft himself used the term "Yog-Sothothery"), but mostly for his creation of heroes who could take it to the grill of Lovecraftian monsters. They are not milquetoast academics who faint at the smell of a fart like most of Lovecrafts heroes. Guys like Crow, though outmatched, fight back against the slimey gods of the Mythos. Lumley said it best here:

I have trouble relating to people who faint at the hint of a bad smell. A meep or glibber doesn't cut it with me. (I love meeps and glibbers, don't get me wrong, but I go looking for what made them!) That's the main difference between my stories...and HPL's. My guys fight back. Also, they like to have a laugh along the way.

I have to admit that this is my favored type of character for Call of Cthulhu play, mostly because I prefer long campaigns. BTB CoC is not meant for long campaigns

Still, I take exception to the somewhat corney creation of entities such as Kthanid (pictured above), a brother of Cthulhu who is his twin, except for his crystal eyes. He is the "good" to Cthulhu's "evil," which I just find way to simplistic and far too Christian in concept. In The Clock of Dreams his is a helpful figure, and I have to admit I think a helpful monster should be pretty rare in The Mythos, no matter what flavor. And c'mon, a helpful brother of Cthulhu is just plain lame.


For my Cthulhu games, I like to find a kind of balance to the hopeless universe of Lovecraft. Sure, you may find a powerful friend here and there, but really, you need a mostly hopeless and terrifying universe to get the most juice out of this genre.
Posted by Kevin Mac at 2:21 PM 2 comments: