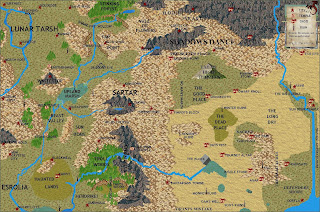 Last night we wrapped up the fairly short (maybe 8 sessions or so) Runequest campaign I popped on the group a few months ago. I had actually intended to mix in a lot more Call of Cthulhu, a sort of Chaosium mix, but we were having such a good time with the RQ that we pretty much stuck with that and breezed through the campaign.

I used the classic Apple Lane setting for this, and went through the usual progression (besides my own added bits and encounters) of the tribal initiations battle circles, Pawnshop Baboon attack all the way through finishing up Rainbow Mounds last night. Whiteeye and his trollkin defeated, and the Lizard Mother and the Lizard Spirits destroyed (the Newtlings made Terry’s character Rowan their queen – for what it was worth).

The party got to touch the adamantine column hidden behind the newt idol, gaining some spells. They also found the Issaries statue to later sell to Gringle. In a wild twist, the party forgot to search White eyes’ lair for the main treasure. They rested after the White eye fight for a night before moving on into what they though was a tunnel to another area (it was actually a small chamber with White eyes bed and the main treasure of the adventure), then later got distracted and didn’t finish searching that area! Thousands of lunars and other precious stuff left behind! Kind of a hoot.

I mean, they were told there would be a lot of items White eye and gang robbed people of, but they happily left without any of that. I waited until they were back at the village to tell them. There was the usually thrashing around for a couple of minutes trying to find the poor GM at fault, but the realization set in that they had been idiots to not realize they didn’t have what they, in part, went to the Rainbow Mounds for. Doesn’t really make up for anybody not getting killed or maimed in the campaign, but it helps.

So time to regroup, get out the Star Wars stuff, and repack my mini’s box with Sci Fi figures. We’ll be doing KOTOR for the rest of the year, with the odd Call of Cthulhu game thrown in here and there when we are short on important players.

But yeah, there ya go. Another campaign in the bag. It’s always kind of a satisfying peace that comes over you when you are at the finish line of a fun campaign. 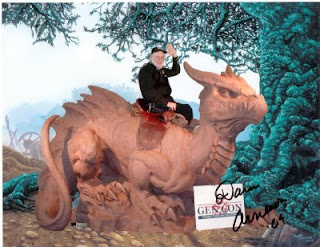 Only recently found out they are trying to get it together to get a memorial built representing Gygax and D&D. Although it seems to be more about Gary himself, I guess it is going to be a dragon with an inscription (yawn). I can see the children in the park now “Oh mommy, look! Skyrim!”

So there is this website you can go to for the information on this. Also, I understand the widow of Gary, Gail Gygax, shows up on convention floors with a money jar looking for contributions to this project. I can understand her wanting something like a memorial to Gary’s works, but the cash jar strikes me as kind of sad. I can’t say if Gail was left a hefty estate when Gary passed. It’s not like Gary produced a bunch of films or something. Royalties from the old D&D cartoon, and his books, can’t really be supporting a South Fork Ranch type lifestyle, could they? But anyway, the very wife of the man roaming game rooms looking for fivers from gamers just seems kind of cruddy. Are things that bad?

See, I think the memorial will be in part an ad for the current producers of D&D and their product whether they mean it to or not (plus the new reprints being sold by WOTC are tied in with this). Why is that bad? Well, I think the makers of the game, with their storied history and all, pretty much abandoned their own fanbase. That is what a lot of the voices of the OSR are about. There are a lot of older folk who stuck with the product throughout it’s various incarnations. I'm thinking the people who are the most passionate about this are the people who supported the game and it's companies, decade in and decade out, both monetarily and by bringing new people into it. I feel these are the people who have a right to ask that their voices be heard. It's a niche hobby where people come and go, but many seemed to have been buying the product for a good part of their lives. The product no longer seems to represent the game people have loved. I mean, even modern players of 3rd edition were gob smacked by 4th edition, which was just a head scratching departure from 3rd much in the way 3rd was from older editions. They don’t just want entirely new task resolution – they want support for the game they love. Many supported 3rd despite it’s differences from the old. They had faith in the company and the game, and then the company once again changed the entire game on them. You can see how the faithful would take issue with them.
Me? I'm not one of the faithful. I don't give a rats ass. I haven't bought a new TSR product brand new off the shelves of the local game jobber since around 1987. Despite ol' Gaz telling me since the earliest days of D&D that the "other" product out there was inferior and should be avoided, I started giving my money to other companies product that interested me. Hero Systems and Chaosium seemed to reward their fans by giving them what they wanted - for hearing their voices and actually having an understanding of their fanbase. I still play 1st edition, using my tore up old books. And I have props for Gary. But as far as I'm concearned I'd have more interest in Sandy Peterson or Greg Stafford getting a statue when they pass. They represented a company and product that DELIVERED.

Actually, no knock at Gary by any means, but if a memorial was going to in part represent the D&D that I play, then that memorial would be for Dave Arneson. He most represents the game I love, even though when I was young I had no idea of his contribution. When I was a little kid eagerly buying the first Blackmoor book, I had no idea who the man was or what he meant. Gary was the face of the game. I didn’t know there was this heart and soul named “Dave Arneson.”

Hey, skip the dragon and make it statues of both Gary and Dave doing a fist bump and I’ll crack open my dusty wallet in a heartbeat. But you can keep your 120 dollar memorial set, WOTC. My tore-ass old books are still workable for my games.