I'm usually about 5-7 years behind on video games and consoles. I guess that makes me not an avid gamer, but I never put more than an 2-4 hours of play into a video game a week. OK, there were exceptions. The oldest being Super Mario Bros 3. In the late 80's when I was in my first decent job (clerking in the MGM/UA studios legal department) I truly fell in love with what home video gaming could offer. I would come home and play it for a couple of hours every night. On the weekend it took up a ton of my time, that was only slowed down by me discovering my life time love of Renaissance Faire.

A lot of my weekends were suddenly full during the year, but I played it fairly often for a couple of years. One of my older brothers, no longer living at home then, would come over to play it when he knew I wasn't around. I would come home occasionally on a lunchbreak to play (my drive to the house from Culver City was at least 15 minutes, but it was worth it for a half hour extra play) and he'd be there on it. I'd go out to the big den on a Saturday morning to play and he'd be there. At one point I just took the small connector cable and said it was broken. He immediately bought his own Nintendo. But that is the power of a great game like SMB 3 that you love. My brother coveted it and I became like Gollum with the ring of power.

But there were also Silent Hill games, Castlevania games, Final Fantasy 7 (the first game I actually logged my hours...I put just under 100 hours into that one), Fallout 3, Knights of The Old Republic (one of very few games I actually played more than once all the way through...a total of 4 times).

And then there were the Elder Scrolls games. Whoa. I discovered Morrowind at least a year or two after it came out. What a game. A new level. The type of play that had become famous for "see that mountain in the distance? Walk to it through lakes and forests and find a dungeon on it to delve into" swept me off my feet. In many ways I was overwhelmed. There was just too much to unpack. Just deciding on all your characters ability scores, aspects, and astrological signs could take a couple hours. So many quests. There was so much to do and I was so often blown away by everything I didn't even try blacksmithing and other crafting. My eventual home in Balmora was strewn with hundreds of alchemy and enchanting ingredients. I didn't know what to do with them, but I'd be damned if I was going to throw them away. I even loved the massive glitches. They were never game breaking. But you would come across a town you had visited before and all the people in it were now suddenly floating up in the sky. Another town suddenly was full of water like a great flood had happened, and the townspeople were swimming about their business instead of walking around. I always looked on such as huge curses or something from a mage. It was part of the fun. 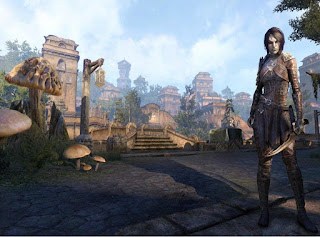 Oblivion was my next step up, and another level. Instead of ignoring the main quest like I usually do for a good while as I went about step and fetch quests, I dove right into trying to close all the Oblivion gates that were popping up all over. 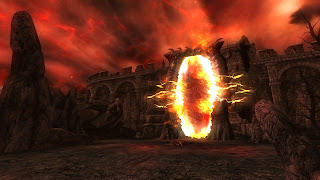 Again and again going through that portal and into that fiery realm of hell to fight the demons and get the Mcguffin. I was really playing it like a true role playing game. I would do things as I perceived my character would. My Redguard went to the amazing Imperial City, and worked his way up the gladiator ranks (I spent hours just betting and watching other matches from the stands before deciding on a gladiator career). The grand champion had to be killed in order for me to become champ, but I liked him (I helped the orcish champ with vampire trouble his family home was having) so I gave up on my championship dreams.

Then of course came Skyrim. An amazing entry into the series. It was dumbed down and lost a ton of the character creation possibilities and depth of play, but the trade off was a beautiful looking setting with epic things to do, including the dragon related main quest. Again, I was a bit late to this game by a year or two, but when I started I was hooked. Another wonderful living world. I created a nord character and got him looking very much like Sean Bean. Fitting, as I had become a Game of Thrones fan by then. Skyrim was hella GoT in flavor. And by now I had started experimenting more with blacksmithing and other crafting.

Around a year or so ago my friend "T" from my home town and long time player in my tabletop before I moved had gotten the gift of gaming head phones, and suggested to me that we start doing a little multiplayer online on weekends. Smashing idea! I had been playing my old XBOX 360 forever, and this was a good excuse to trade up to the latest. And the virus was just getting out of control so this seemed like a good time for it (even though since I now worked in health care I still had a job). T is a bit of a Hollywood socialite (former actress) and is usually out at big parties on weekends, but now she was stuck in like a lot of people. So I ordered a pair of gaming head phones from Amazon, picked up my new nifty XBOX at Best Buy curbside, and it was a go.

So the search was on for a game I knew we could both like to play. My choice ended up being an indie game called Necropolis. It had a great, goth cartoony look I liked, and the play was based off the Dark Souls engine I think. It was only 6 bucks or so, so it wasn't a big gamble or anything.

It was fun, with your alien fighter or assassin slashing and bashing their way through a terrifying alien mega dungeon full of undead.

But in the end it was a frustrating experience. Not the game play, though there were glitches here and there. Often you might find yourself falling through the floor and plummeting down through the levels to your death, or get perma stuck on a ladder. But the killer was just trying to get together in multi player. It was hard as hell. It would often take up 20 minutes to log in together. And you more often than not did not restart with your gear from the last save. After a few weeks, with hat in hand I told T I was done with it. It was a waste of time if you could barely even get the game going.

So the search for a new game was on. T wasn't really into looking at the games in the XBOX online store, so it was really on me. And I had to pick something good that would not be a controller throwing experience like Necropolis ended up being. So I looked at the reviews, and even games that looked amazing had lots of bad reviews, especially about the multiplayer experience. But then it struck me.

I had known about Elder Scrolls Online since it had come out. Years ago. But never heard much about it. World of Warcraft was the 800 lb. gorilla in the room. They even made a movie about it. But hey, T was a big Skyrim fan. I was an Elder Scrolls fan in general. So that simple math added up. Was an MMO the way to go?

My doubts were many. This was a higher level of multiplayer. What if one of us had internet that wasn't strong enough? Though T runs an office, she can be a bit of a non-techie. Would this require a lot just to get up and running? Plus games like this tried to constantly sell you on expansions. How intrusive would that be? Also in an MMO you had to play with people you didn't know. Not sure T would appreciate dumbshit, horny 14 year olds doing what they do in games. This might have been especially problematic in the MMO I was considering besides ESO. I loved stuff I saw of the game play of a game called Sea of Thieves, where you and friends pilot ships around various islands looking for treasure and chickens or whatever. But this game was automatically player v. player. Beginners usually end up being attacked by pirate gangs who kill you and sink your ship. No, this game was out.

As a fan of Red Dead Redemption I also considered Red Dead Online. But I knew T would probably prefer something with magic and spell casing.

So I went ahead and pitched T on Elder Scrolls Online. The basic game (that currently comes with the Morrowind expansion) was only around 20 bucks. She was intrigued. We decided to give it a shot, download it, and play it the following weekend.

My worries remained till then. Also, I thought that there was not way they could have anywhere near the deep experience of the solo releases I had come to know and love.

What happened next was totally unexpected.