Epic Spell Wars is a series of boxed sets based around the concept of spell casters, seemingly straight out of the pages of 70's and 80's underground comics, who formulate powerful and devastating spells created from three different components.

My set is Dual at Mt. Skullzfyre. There is no board per se. But there is a nifty standee... 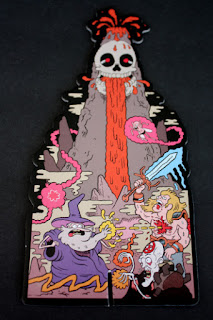 In this set the standee doesn't really do anything other than inspire. But some other editions include a rule about controlling the standee that gives it a bit of purpose.

Much like King of Tokyo, the characters are nothing other than art. They all have only one attribute: hit points. 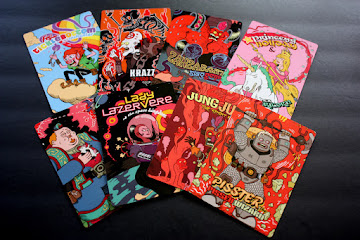 Every round the players fill up to a certain amount of cards in hand. They then go about crafting their three part spell. Initiative is based upon a number in a little red circle on the Delivery card. Spells are made up of three card types that come in an exact order; Source, Quality, and Delivery.

Source and Quality will usually include some affect, most often damage, and the Delivery is almost always a table to roll on to see what main damage you inflict with the spell. Each card has an element in the lower right corner. For each of these elements present in your three card spell you get an additional die on the Delivery table. So if you have all three of the same element present you get three dice on that table.

When its your turn you reveal the cards, announce the name of the spell, preferably in the voice of your crazy character, and then deliver the damage. Last wizard standing is the winner. That's about it. Anyone who died gets to start the next game with a Dead Wizard Card, that gives them some minor advantage in the game.
The only real strategy is using as many elements as possible to get the best roll on the Delivery table. But really, just putting together a funny or cool sounding spell is just as good a strategy; this game is maybe the most based on luck than my other faves.
The other set I have is Panic at the Pleasure Palace. 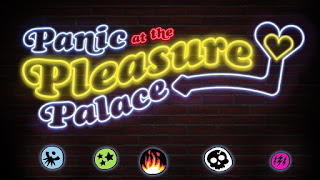 It is essentially the same game play, mixed up with a couple of other elements. The characters and spells are a bit more x-rated. And a new feature includes being inflicted with and trying to remove spell casting-based venereal diseases. Oh yeah, this set comes with a testicle shaped bag to hold yer bits and bobs. 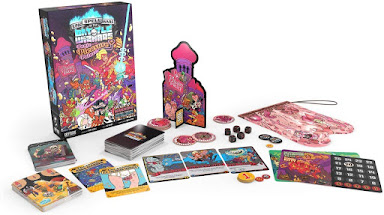 Like King of Tokyo a typical game is about a half hour.