When I moved into my new town over two years ago, I spent a certain amount of time at the local comic book/game shop. I got some 5th edition experience there (the game play was about what I expected from a game shop, a type of location I hadn't gamed at for decades), but the most fun for me was the browsing the tons of board games on display.

One of the things I wanted a change from in my move from Los Angeles was my high cable bills. So I just got Spectrum's "Pick 10 option" was getting 10 of your favorite basic cable channels (and also a bunch of the free channels usually available using a TV antenna) available without a cable box; it was all streaming. So I ended up getting my first streaming device, a Roku express. It was on Roku I discovered Pluto TV, a grouping of streaming channels that the next couple of years would be my most watched format. Pluto has channels dedicated to particular TV fare of various vintage. One channel might be all Baywatch episodes. One might be James Bond movies. Another showing endless episodes of Dark Shadows. But Pluto also had channels dedicated to internet shows of recent years, such as a Minecraft gameplay channel, several IGN channels, and Geek and Sundry. It was on Geek and Sundry that I discovered Will Wheaton's board game show Tabletop.

I was never much of a Will fan, but in all honesty I think I just bought into what seemed like a geek conspiracy to hate him (for being on Star Trek while they were not, maybe?). Getting to know him on the show I got to like him and his sense of humor. Will's guests would include a long list of geek media personalities from the fringes of movies, tv, and gaming. A virtual "who's that?" of pop culture. Non-household names like Grant Imahara from Mythbusters, porn gal turned D&D convention maven Satine Phoenix, and even the queen bee of Geek and Sundrey (at the time) Felicia Day (one of my secret pleasures was her and her bullying brother Ryan's video game play show Co-Optitude). BTW good news; Zak Smith never appeared on an episode from what I can tell.

I eventually would discover several games I love to play, and one I would love to but never did. That first one was Eldritch Horror, a game that looked amazing but once I got it on my table I had a hard time figuring the ins and outs. As usual in a Lovecraft game it was full of rules mechanics that seemed unnecessarily dense and high maintenance. That game has sat unopened on my shelf for over two years. 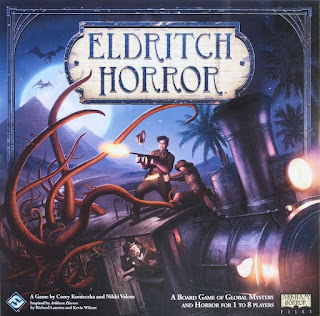 But my great board game loves of recent times I actually get to play where on the show, most of which I will talk about in upcoming posts. Games like zombie crisis colony game Dead of Winter, the dream-like Forbidden Island and Forbidden Desert, Epic Spell Wars (think of it as Beavis and Butthead if they invented a board game), and what I am talking about today; King of Tokyo.

King was created in 2014 by Richard Garfield, mastermind behind Magic: The Gathering. The basic "plot" is that you play one of several Kaiju. Some are clearly based on existing Toho Studios monsters, like Gigazaur (Godzilla), The King (King Kong), Mecha Dragon (Mecha Godzilla). Some are just plain fanciful, like CyberKitty, a giant...cyber...kitty...

Different editions will change up the monsters, and you can even buy separate monster packs with a new monster and associated cards. My favorite of these is Pandakai, a Kaiju panda.

The monster you choose doesn't really have any special affect on the game. It all mostly happens in the dice. So, you start with a health total (hit points represented by hearts), zero victory points, and a deck of power/event type cards that flips out three starting cards. These cards can be bought using energy (we like to call them "Energon Cubes" like from Transformers) you can collect based on dice rolls. There are two ways to win; either defeat all other monsters (bring them to zero hearts), or get 20 victory points. Victory points are collected either through dice rolls or card affects. I won't go into detail about the dice, but it is a very cool part of the game. I'm told it works a lot like games such as Yahtzee, where you can roll multiple times to try and get certain outcomes. You might be rolling to collect hearts to heal, or you may try for victory points (gained by rolling multiples of the same number). You can also collect attack symbols to clobber your foes.

There isn't really a game board to move around on per se. Its just a small board representing Tokyo. When a combatant is in Tokyo all his attacks hit all other monsters. But all other monsters attacks hit him! Plus you cannot normally heal in Tokyo, so your time there will be short. But you can collect victory points by getting there and staying there.

You can collect energy from die rolls to save up and buy cards. One card might let you have an extra head so you can roll an extra die. Another might depict a dedicated news team who follows you around and gives you victory points due to the press exposure (things like this add great flavor). 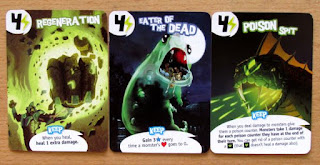 Turns are action packed and the game goes fast. Too fast, I think sometimes. Many sessions will see few power cards get brought into play. Sometimes you are just too busy collecting heals and punches to spend time building up energy cubes. But some cards can be game changing for you, and they add a great flavor, especially seeing as cards can be the only thing that truly distinguishes a character. Sometime we play with slightly higher hit points and a need for more victory to win to have a better chance at bringing multiple cards into play.

Sessions tend to be short, averaging probably 25 minutes. But the game is so engaging and full of Kaiju goodness you can do several games in a couple hours. Its perfect for if your longer favorite game goes short. And its easy enough to learn for kids too. You can get it for less than 30 bucks, and the price point is amazing for what you get out of it. 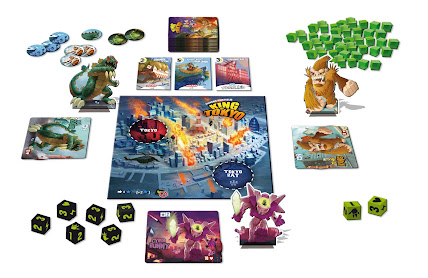