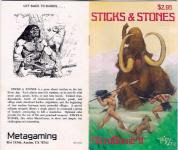 OK, it wasn’t my most played microgame of the late 70’s. That distinction probably went to Rivets. Hell, I think I only managed a couple of games with one of my buddies. It was a fun little game, with 10,000 BC dudes slugging it out with Mammoths, and each other, for supremacy of their area. You could choose for your session a hunting expedition, or maybe an attack on the opposing tribe across the valley. You could steal their goods, and their women. Good times, all played out in classic Microgame style.

I mainly mention the game because it inspired one of my many homebrew ideas to never reach fruition, namely, to do an entire campaign of my own design based on the time period. PC’s would be Cro-Magnon men, doing the type of thing Cro-Mags do. Just like in Sticks & Stones.

The system was a no-brainer. I would use a version of my Road Warrior rules, a set of rules I came up with for a short campaign that I ran in the early 80’s.

I think the thing that held me back and ultimately kept me from going ahead with a game was the fact that I could not decide between realism and fantasy. Should I do this straight, with no magic or fanciful creatures? Or maybe something close to it, but with perhaps with a touch of the supernatural. Shamans and perhaps solitary, primitive wizards came to mind. Maybe light touches of magic, or even a clerical or wizard type class players could play as.

I even considered a full on fantasy take, with dinosaurs alongside man, but supernatural monsters and demons, dragons and perhaps even Gods walking the earth. I even thought of having aliens in a spaceship get encountered at some point (The Barrier Peaks?). Yeah, obviously Land of the Lost had a lot of influence on me there, along with a certain amount of Edgar Rice Burroughs and the Marvel comic Devil Dinosaur.

By the late 80’s, I was running plenty in my D&D world Acheron, and also putting in lot of GM duty with Champions and Call of Cthulhu. Really, with these three games going as successful campaigns that went from the 80’s and well into the 90’s, I just didn’t have time to introduce another game genre to my players. Hell, it had been hard enough to sell my regular D&D folk on Champs and CoC (which they loved once they experienced them).

With all the great shows on Discovery and History Channels in the last decade or so, and movies like the recent 10,000 B.C. (I actually liked it for what it was), I still get stirred to try to get a “Sticks and Stones” type role-playing game going now and again. But if my group plays anything else but D&D for a break, it’s probably going to be CoC or Champs again. But a GM can day dream, can’t he?
Posted by Kevin Mac at 5:26 PM