Help! A wizard stole my face! 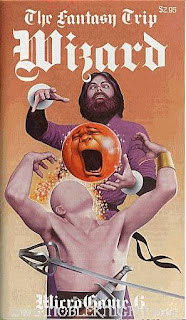 Melee and Wizards were two games we played a lot in Jr. High and High School. Unlike a rousing game of D&D, you didn’t necessarily risk derision for it. It wasn’t pretending, it was just a board game. Everybody grew up with board games. And shit, these micro games were just board games with cool violence and blood letting. There was a guaranteed bloody death each and every game!

In private though, we did tend to role play a character a bit, especially after the point when our fave fighter or sorcerer actually survived 3 arena fights.

At Venice High we had an old history teacher whose back room was a nice little museum, with cheap artifacts under glass. Mayan ear wax scooper-outers, copper coins from ancient times, that kind of thing. A lot of us in his history and mythology classes loved it in there, and he seemed to dig the little board games we were playing before he showed up to the class. There was no real learning to be had from Melee and Wizard, but to him the art in the booklets seemed like they were out of history books or books on ancient weapons. He even started letting us play a few rounds in the room during lunch break.

At some point, just before the whole Fantasy Trip thing, I decided to create a city setting for our surviving characters, and new ones, to trod around in. We wanted the arena fights, but they had more weight if our characters could do stuff beyond the battle field. I think I called the city, simply, “Skull.”Eventually my exponential love for my D&D game world would take me away from hopes of doing more with these little paper characters to have more time for that, but there is no denying it. Melee and Wizard were great fun when all you had was an hour or two.

As for the cover of Wizard mentioned in my post title…well, what the hell can you say? My friends and I were tormented over exactly what spell this was portraying. Certainly nothing in the game, those spells seemed to have more to do with doing physical harm or summoning animals. I think there was some spell or another we suspected might have inspired the art, but not from Wizard. Maybe that high level AD&D spell that traps someone in a globe and sinks them below the earth? Naw, then why just his face? Soul trapping? Hmm. The world may never know…
Posted by Kevin Mac at 2:58 PM