Nintendo Switch and Breath of the Wild part 1

A portable console? I never really felt I needed one. My early progression was Nintendo consoles (I had one about when Super Mario 3 came out in the early 90's), to Genesis, to PlayStation, to PlayStation 2, and on to being an XBOX guy with the 360 and now to the latest XBOX. .

In recent years when away from home I was happy to play Poker on my iPhone or iPad when the moments were free. For about 10 years I have loved to play Governor of Poker, a great app. I started with 2, and they are on GOP 3 the last few years. In 2 you just played the computer AI, but 3 introduced playing with people from around the world. It actually seems to encourage trash talking and flirting. Fun for quick 10-minute breaks.

And hell, I don't find the time to play on my consoles as much as I would like. It was the rare game that had me playing more than a couple hours a week. But there were great loves that had me going 6 hours a week or more. Final Fantasy 7. The Resident Evil games. Fallout 3.

But in recent times I have been watching a lot of G4 and IGN and other video game related channels, content on Pluto TV streaming. Most of the programs are years old (besides G4 which is on a relaunch year, and just laid off most of their office and on camera people, including the odious FROSK), but I still like to watch. Nobody talks much about the Nintendo Switch lately, but it did come out half a decade ago. But the content on some of these channels is years old. And this year I have seen a lot of talk about Switch, albeit, again, from a few years ago. And some of these older bits included one of my current favorites, Scott the Woz.

Scott does pretty funny little video game review and history skits, and I became a fan right away. And Every year since the Switch came out, he does a segment on it based on its existence up to that time. And this went a long way to perk my interest enough to nab my own Switch.

So then came the long road the last several months of getting one. Yeah, I hemmed and hawed with myself. I'm not broke or anything, but with a couple games and a couple years of Best Buy Geek Squad replacement was well or 400 bucks. But I worked hard, at a hospital, during the height of the pandemic when most of my county sat home on their asses collecting fat Biden bonus Unemployment checks, and felt I needed to start rewarding myself.

Regular versions were around. But I wanted the OLED, which has a bigger screen and couple other nice upgrades. Better speakers and such. But the OLED had to be ordered. It is a popular version, there was a shortage due to pandemic demand and chip shortages (thanks again, Sleepy Joe!), and this was something I needed to impulse buy. I'm not going to wait a week and a half.

This went on forever. But then it got a little better. Just a three- or four-day delay. I can have it by the weekend? Fuck yeah! I hit "buy."

I was excited when it showed up. I wish I had done an unboxing video or something. But you can still watch one.

Yeah, easy as pie. In less than a half hour I had a couple games downloaded. One was a scroller I had admired from afar for a couple years. It was Cuphead, a run and shoot side scroller that featured characters straight out of nightmarish old 1930's toons. It was originally a little indy game but got popular fast and you can find it in places like the XBOX game pass. And of course, in the Switch shop.

I got Cuphead to have a basic little game that does not need a big screen TV to enjoy (although it looks awesome on my 60 inch). This is what I would most likely play on a park bench or hotel room. But my epic game to enjoy at home would be the game most people buy the Switch to play. Legend of Zelda: Breath of the Wild. Because I have a lot to say about this open world solo game, I'm going to do a part 2 about that in particular. But just a few words about the fun of the Switch console itself.

Less than half the size of my iPad, it seems weird to think of it as a console. But that is what it is. Unlike your iPhone or iPad, it is designed purely for gaming. And it seems a powerful little thing.

The Switch surely gets the name for all the switching up you can do. First and foremost, the big feature is the portability of play, so out in the field you will play with the "joy Con" controller bits attached. 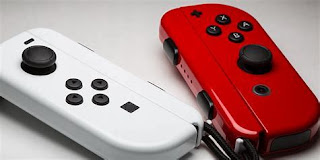 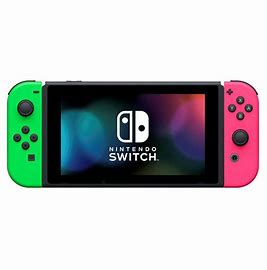 When you slide the joy Cons in, you get a satisfying electronic "snap" sound. 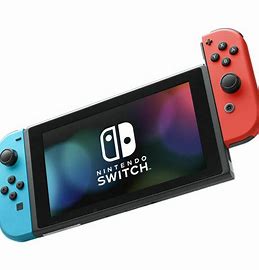 And when you want to play on the telly, you stick your console into the docking station where the HDMI cable goes to the TV.

When docked you stick your little joy Cons into the "grip, and viola you have a little controller. You can actually do this when not linked to the TV. The Switch unit has a kickstand so you can set it on a table.  The joy Con grip combo is fairly sturdy and does the job well, although if you desire the usual controller size that you are used to on other consoles you can actually get a variety of separate controllers.

I may just get a basic controller if for no reason other than I play 90% of the time on my TV so far. I have travelled very little with it. I have used the console on its own usually kicking back on a Sunday to play Cuphead, a game that works well for a small screen. The joy Cons themselves have no battery, but the last a few hours when charged, and when attached to the console they are always charging. The Switch unit itself seems to hold a very good charge.

Breath of the Wild? Well, it's a big, beautiful world in there. And such works best on a big screen. But I've had some moments with it off the big screen. You can get hundreds of games for Switch, but Legend of Zelda: Breath of the Wild is the big monkey in the room when it comes to this console. And I'll talk about my experience with it next post.