Two New subclasses - The Voor dwarf, and The Broken Aasimar

In my latest campaign (run weekly on Roll20), I introduced two NPC's. One is an albino dwarf long known in my game world as a "Voor," and the other a 5th edition specific race known as Aasimar. In this case, a sub-class I created of Fallen type I'm calling a "Broken Aasimar."

OK, first the Voor. Its less complex than the other and is actually a dwarf race that I came up with for my setting around 30 years ago or so.

I honestly don't remember the specifics of introducing them into my world. I just remember a party from the city visiting a lone mountain sitting 3 or so days north. Once a small kingdom of friendly dwarves, some time centuries past a strange gas was released by mining there that engulfed the dwarves of Voor mountain and mutated them. They were bleached albino, and their bodies became a bit more emaciated in contrast to the usual stout dwarvish form. They lost passion for most things that bring joy to dwarves, and in fact lost a sense of emotion. Not becoming truly evil, just kind of sociopathic. 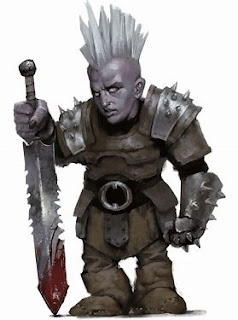 I don't really recall why I didn't use Duegar or any number of fallen dwarvish races that came along with the Fiend Folio and Monster Manual 2. For whatever reason I did not delve into these alternate dwarf races until decades later.

The Voor NPC in my current campaign, part of a duo the characters have come to call "The Odd Couple," is a young girl named "Demul." 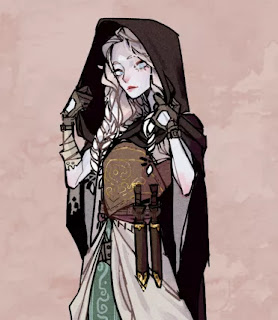 Demul and her friend Relanis are travelling musicians. But in Demul's case not a bard, but in actuality a Rogue. So far I have enjoyed her being underestimated. Quiet and always following Relanis lead, Demul discovered she had a strange power prior to the campaign while practicing playing a flute. When she plays a sinister tune on it (I've been humming the old Dark Shadows theme when she does it), a certain amount of undead come to unlife and begin attacking whatever living things are nearby. So far she has no control over them. Indeed, she seems to have a certain lack of control about using her power in general. She is obsessed with this ability, and dead things in general. And because, for certain reasons, the "Odd Couple" is following the party at a safe distance, Demul has brought dead things to life that the party has had to deal with. In the first session at an inn in town there was a stuffed bear in the bar. From a dark corner Demul player her tune, and the stuffed bear was the first fight of the campaign for the group. 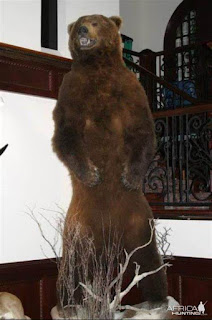 In the second game the party fought a troll on the road, eventually burning him up in fire. From the treeline, Demul played her tune and hey presto, the party were fighting a zombie troll. 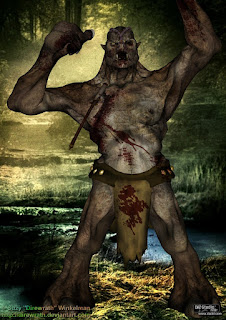 Her travelling partner, and mentor, is the 26 year old bard Relanis. Dressed very straight laced, and wearing half a face mask and walking with a cane due to childhood injuries, Relanis is secretly a "Broken Aasimar." One that became "fallen" due to her transformation happening during severe childhood injury.

A traditional Fallen Aasimar is an Aasimar that experienced some kind of emotional trauma that caused their Aasimar form to take on a more demonic appearance. Especially so in the case of a Broken Aasimar. Perhaps a bit cruelly, the Aasimar form of a Broken has no such injuries or disfigurement.

So Relanis and Demul follow the party around, slowly gaining suspicion. It actually took the party awhile to realize that they were responsible for the dead coming back to life after they killed it. And also that Relanis has an obsession with the Paladin (also secretly a Protector Aasimar) Callie, a lovely unassuming, cookie baking village girl who doesn't even seem like a paladin (she often uses a rolling pin in battle).
One of the traits of my Broken Aasimar class is that they are in large part driven by nightmares as well as dreams, and also have a minor sense that somebody might be an Aasimar of some kind themselves.  Though in Relanis' case the nightmares tend to be about her childhood injuries, caused by her house burning down with her in it. But as soon as she saw Callie in the first game, she sensed something, that she may be Aasimar as well. Hence, she and Demul follow the party, usually at a distance, because Relanis wants to be around when Callie makes "The Change."
This caused all sorts of suspicion, right up to this last session where Relanis asked the party to come along on a short adventure nearby ("we are musicians, not fighters"). In the goblin caves things started coming to a head. While Callie is a bit freaked out by "the Odd Couple's" attentions, its the parties grimdark Shadow Elf that treats them like crap, and since he hates undead, he has come close to drawing down on them when he learned Demul is responsible for all the foes coming back after a fight. There was a lot of tension in this session, especially after Relanis and Demul (hanging in the back) were ambushed by goblins and Relanis made the change to her Aasimar form. Relanis broke into sobs after changing back (the Aasimar form is not disabled and has no face burns, and Relanis wishes she could stay in that form), and instead of sympathy, the Shadow Elf still wanted to kill them. But the fighter Zip, who grew up in a small village with Callie, has a certain fondness for Relanis after she bought him a tavern dinner in a previous session.
The inclusion of these two unique NPC's in the campaign has paid off as a nice side-interest thing, and I so look forward to where it is going. The party just turned 3rd level, so Callie should make and Aasimar transformation before too long. It will be Suprise for her seeing as the player has her clueless about that celestial blood, and maybe at that point she will understand why Relanis has such interest in her.  The party is none the wiser about her secret race. And my misdirection of having Relanis show a morbid interest in the Shadow Elf ranger has helped them remain clueless. I was a bit worried originally that I might blow it for Mary, the Callie player, by drawing all that attention then her stalker turning out to be an Aasimar. But it remains secret.
I think I will make a quick post on the origins of "The Odd Couple" in this campaign. I actually have specific reason for why I included them. But for now, it's just fun to get some experience with Aasimir in my games, and to finally after all these years get to touch upon the Voor dwarf race with the inclusion of Demul.
Posted by Kevin Mac at 4:23 PM