Sirens: Battle of the Bards (the rise and fall?)

A few days after the whole elf ear cosplayer Satine Phoenix and gym freak Jamison Stone (together maybe call them "Satine Flexnix?") thing blew up, my fascination slowly wanes. After watching a couple hours of this Foster guy's (a dude who did an after show for Critical Role or something) stream where he interview the people who paid Satine and Stone something like 20 grand to hype their cyber security company at Pax I was a little bit spent. But it was kind of gripping. This guy and gal staked heir future with the company they pitched this idea too, and ended up having to play personal assistant to the two knuckleheads. Carrying extra bags with their shit, fetching coffee..

...being lectured on professionalism, and even being criticized for their body types and relationships, all the while Satine and Stone did everything to further their bank accounts and fame while ignoring what they were getting paid for. A lot of it on camera. Big pimpin, yo..

There are a ton of other stories of course. All the unpaid or underpaid contractors who were stiffed and insulted. And I'm guessing there will indeed be more to come. I would not at all be surprised that sexual impropriety will come up at some point.

Jamison Stone, well, I dunno his background. Rich family. Propensity to martial arts and cult memberships. How these two hooked up I have no info about. But there seemed to be some kind of road to a new cult going on:
So yeah, its likely a lot more will come. I'm guessing there will be more throwing under the bus by Satine of her weirdo hubby. And maybe he will have some accusations of his own. 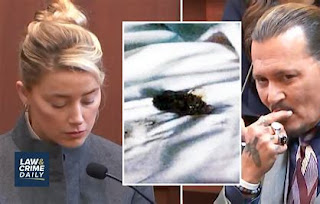 But during this little lull in the pain and shame, I've been checking out their latest project. 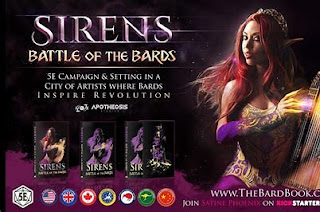 This Kickstarter reached like 300,000. There were tiers of upwards of 3 grand, where stretch goals included things like going to Colorado to play D&D at their house for 6 hours. When the time is up I kind of imagine a trap door opening under your chair and you shooting down into a tube system that pops you up at the local airport.  You can get your character fleshed out with artwork, and a short adventure about them. Gee, that sounds like its worth 3 grand.

But all kidding aside, outside of the overflashy art and Satine's heavily made-up mug being all over the stuff, the actual setting sounds interesting. If not a bit over the top. The setting focus' on the city of Sativa or some such, a magical tiered city chock full of colorful bards type. They came up with 20 new bard sub-classes, I guess so the entire setting doesn't reek of same-same. Though I'm not sure how far you can pull the taffy to get over 20 distinct bard varieties. This is what I am the most curious about.
But a bard war (or whatever) sounds like an interesting concept.
The setting itself seems kind of Sci Fi to me. The city would for sure not fit into my setting. 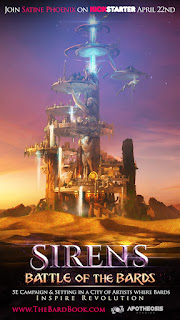 And some imagery suggests a more modern setting, such as the one with a saxophone player. The listing of locations in the city includes "comedy clubs." Zuh?
But OK, sure. Maybe high fantasy these days is all about the higher, less restrictive concepts. Fantasy world with a sax? What the hell. There are worse things going on in D&D games.
For this game you are probably going to have most of your players running bards. But can they be different enough to not seem odd? I guess they could. I once ran a 1st ed. thieves guild thing were besides a plain theif you could do a thief fighter, thief MU, thief cleric, or whatever, and it worked well. Those kinds of campaigns are common, so I guess this is maybe a modern extension of that.
On top of it all, I guess you get a god like character based off of flexi Jamison himself..
After seeing her make-up and rubber elf ear-free apology, despite what seems like some Amber Heard level acting, I feel bad for her. The tears weren't copious, but there was about a gallon of snot. With no tissues making an appearance. Just finger wiping. She should have at least removed the nose ring, but for all I know its keeping the plastic surgery together. But seriously, I can't help but feel bad. She was living high on the hog in the small gaming space. She may have been bound for bigger things. But in this day and age of social media, its just best to come off as a great person. To treat people as well as you can. Overwhelm them with kindness. That seemed to be the surface, but so much is coming out it just seems she was a a huge ego that kept growing bigger. Losing wisdom with age instead of gaining it. It really is in the end a tragic tale.

Anyway as for Battle of the Bards, I'm honestly thinking of yoinking some of these concepts, on a smaller scale less filled with hubris. I've long wanted to do a thieves guild thing again, but a bards guild campaign might be a fun twist.
You gotta wonder what will happen with this project. Just like Zak Smith's 4 year late Demon City Kickstarter, the comments pages are full to the brim with negative comments and refund requests, though I'm sure there is plenty of Simp support in there. I didn't read very far.
But as for Satine and Jamison Stone, I sort of hope the whole peacock cosplay D&D player thing is close to an end. I'm not a fuddy old neckbeard, but I kind of prefer the more down to earth classic players of old. YMMV.
Posted by Kevin Mac at 3:27 PM