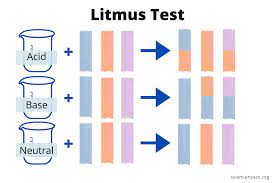 This was something I have been doing for years, but I never had a name for it. I didn't even think of it as a thing. I just did it. But my recent experiences running for a new group (3rd session coming this weekend), all strangers to me, compels me to blog about it. So I needed a name for this test I do at the very beginning of the first game of a campaign of D&D. At first I wanted to call it a Litmus Test. But until I looked it up that term didn't really apply. It was just a name for things, usually not matching the pure definition of it. Hence, the title of the post. Good a name as any.

The "you meet in a tavern" trope was something I did as a kid when I first started DMing. It was easy. Just be at a tavern. When I started my own setting after using Judges Guilds Wilderlands, it was essentially a tavern (in a village...gotta have a supply shop too) and a dungeon. That was it. Its a loooong story, but my world grew from there. But at some point in the late 80's, I got more mature and creative as a DM and started going outside my usual box. Characters meeting on a crossroads and something happening (save a family from bandits, encounter a mage who needs help, etc). That was a favorite. Or all of them starting out hired by somebody and already in a room meeting about what was to come, the players doing what they do in any first game (because I make them); describe their characters to everybody. That "already hired" method worked great for superhero campaigns, and even Call of Cthulu in some cases.

So well into the late 90's it was anything BUT meeting in a tavern.

But at some point for D&D I went back to the "meet at a tavern" gimmick for one particular reason. Whether it was a group of new folk I was running for, or the usual group, I would more often than not go into it not really knowing how the characters would combine as a group dynamic. A couple characters might be easy going and not particularly violent, but even just a couple of murderous PC's, merciless "Murderhobos if you will, can spoil the bunch. Not just that, they can ruin any chance for a peaceful meeting of minds for the new party. You see, a group of gang members or just basic thugs will start a fight. They will claim the table is locals only, or they might hit on a female character a bit too aggressively. Whatever it is, a fight will erupt. But the first fight in a civilized place that a party has can tell you a lot. And that is why it started being a test for me. How violently and mercilessly will the party, or at least a portion of it, react to a less than lethal threat? Its good to know early on so you can adjust your campaign plans to account for violent sociopath PC's shitting on your good works. Lets face it, few campaigns are suitable for both murder hobos and heroic types. I like a group of mixed philosophies, but the party will lean one way or the other more often than not, and I want to account for sociopathic behavior. If the party wants to kill everything in their path, then I'll plan on more fights over any kind of intelligent role play. Fine with me.

So here is the test: the party is at a table in a crowded tavern. They mostly don't know each other, but it was the only available table so there they are; either introducing themselves or focusing quietly on drinks and dinner. A group of toughs appear (a gang of local rakes; some barbarians just rolled into town; a half-orc work crew just off their shift, etc). They start some trouble ("hey good lookin!"; "this table is locals only!"; "there is a beer tax for sittin; here!"). They may be armed, but knowing its a guaranteed night in jail at the very least if full weapons are used in a fight they opt to start out with fists and feet. If things are going badly daggers may appear, but not full size weapons unless the other party draws first. 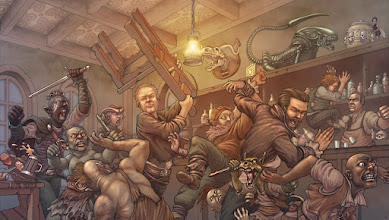 So in the first game of my recent campaign I did this. Party at city inn. It was The Bonfire Inn on Bonfire Street. The largest and most popular tavern in Tanmoor. It also happened to be Queen Libertine's birthday, and the characters, individually, witnessed the queen riding in her own parade, stopping occasionally to politely refuse costly presents from nobles, and accepting letters and humble homemade presents from the poorer folk of the city, showering them with gold coins in return.

The city was drinking, in a way a city often known as "The City of Cups" only can. So as the PC's entered the bustling tavern to get their own drink on, they were lucky to find a mostly empty table in the back. But it wasn't long before my "test" began. The were approached by a gang leader and a few of his followers. They were know as "The Ragdolls," a colorful group who did themselves up in colorful rags and ribbons in the fashion of rag dolls and corn dollies. Another group of young upper middle-class thrill seekers in it for the kicks. 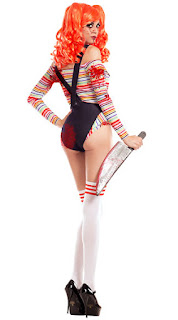 The gang wanted the table, exposing the classic "locals only" philosophy. After a little verbal back and forth, the leader swung a wine bottle at the barbarian dwarf and the fight was on. Though at least one character, a wizard, had stepped aside to wisely avoid getting in a fight, the dwarf, half orc fighter, and the druid who fancied himself a bit of an assassin were right into it with deadly weapons. The druid threw a fire bolt. The half orc immediately swung his great axe at the lesser armed leader, sinking it inches into his shoulder blade, taking him to zero and almost killing him with that one shot.

The gang member who got hit with the fire bolt took off at full run as best he could through a crowded room, and the dwarf wanted to toss his hand axe at him from behind. When I made sure he knew it would more than likely hit an innocent with that shot, and could count on being out of the campaign in prison for a couple games (or more if he killed anybody from behind) he rethought it. I don't usually interfere with a characters decisions, or go a ways to explain the consequences of a characters actions, but here in the test it is acceptable.

And when you know a character will tend to try and kill a retreating enemy, who had yet to attack anybody, in the middle of a city in a crowded hall, you knew that you had a sociopathic character on your hands. Sure, he's a barbarian. But not all barbarian characters are run like that. But the test showed me this guy would be. No prisoners. Good for a DM to know. 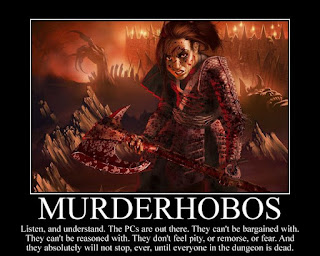 So I knew what I was dealing with and the test was done. At least a couple characters were going to be murder hobos, with a druid who also had not hesitation to throwing a fire spell in a busy tavern. I ditched the idea I had for the campaign, an NPC heavy urban series of games, and decided to go for hooks and quests that would take them away at least from the major civilizations. Dungeon delves where they would be met by other brutal things rather than spending the games bullying locals and town folk.