Finally - Betrayal at House of The Hill 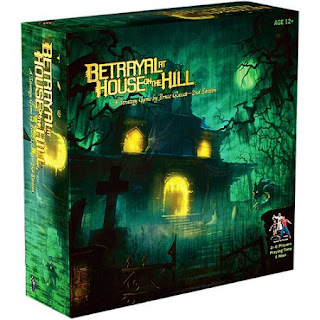 Around three years ago just when I was getting ready to move to a new town, I only had free antenna TV for several weeks. It was on one of those channels that I discovered Will Wheaton's Geek and Sundry show Tabletop. All the board games I currently love, besides Digital Talisman, were purchased after seeing them on episodes of that show. Dead of Winter; King of Tokyo, Epic Spell wars. My love of board games, never really a thing for me outside of Talisman, had begun.

Because my travelling friends B and L are back in town for a few months, I went ahead and pushed the button on one I've wanted a long time so I could try it out with them. That game was Betrayal at House on The Hill. The best thing about B and L, besides being my besties in town, is that these games are newish to them as well. The local board gaming community has long since moved on from these games (usually to often abstract worker and resource allocation things I find boring), but they are kind of new to us. Even something like Dead of Winter feels newish, as each game we play seems very different from the last.

Hilariously, most bad reviews on Amazon for Betrayal are from mothers who bought it for their kids expecting Lugosi Dracula or Karloff Frankenstein to be the foes (versions of these characters are in the game), but found it to have demonic/satanic elements. Well, yeah, if you come up with 50 different hauntings to create the end game, you are going to hit pretty much all genres. Devils, spirits, ghosts, demons, etc. Personally I love the concept of demons, and they are far more fun to me than other creatures you might find chasing Abbot and Costello around in the 50's. 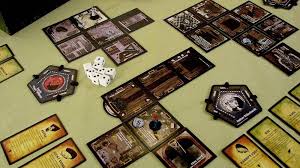 In the game you explore three  floors of the haunted house. The ground floor, second floor, and basement. As you move from room to room you reveal a room tile. Though the room description might be "dining room," "laboratory," or crypt, etc, what is important is if there is a card to be taken and revealed. Three card types in three piles are there and depending on the symbol you will get an item, event, or omen. They might all help or hinder you in some way, but the omen cards are the most important to the game. For each omen you have in play, you must roll under that number each time a new omen is revealed. If you fail, the haunt phase begins. You cross reference the room with the omen just pulled on a chart and you find out what the haunt is and who is the traitor. 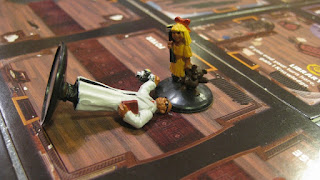 The character cards are two sided, and each opposite side seems to a very different person, though they kept them similar looking enough so the included miniature for each can be used for either. The young high school quarterback on one side, a lineman looking guy on the other side. The male child figure represents either a Caucasian boy or a Japanese boy. A professor, a priest, a fortune teller, a Hispanic lady. All have their own stats. The physical stats being might and speed, and mental being sanity and knowledge. Attacks could harm any of them and reduce them. But you can't usually die until after a Haunt starts.

So each character goes from room to room, encountering events, items, and omens. These can be helpful or hurtful things (helpful items might be a spear that helps you fight or a set of armor). Omen cards will eventually lead to a Haunt.

When the haunt occurs, somebody is going to be a traitor. It may be whoever revealed the last omen card, or it could be somebody else. You cross reference a chart with that omen card and the location where it is found, and you have a Haunt on your hands. Somebody maybe turns into a werewolf, or maybe a controller of demons who sends them to hunt you down. There are 50 such haunts, some more powerful than others. One may leave you little chance of winning. Another might be a breeze. But is always fun, and it all pans out as a great little story. And experiencing that story is one of the things I love about it. A game like this promotes role play. In a game like that, I might have my character do something less about what might let him win, and what I think that character would do. Winning is just icing on the cake.

One downside right now is that we have played like 5 games, and two of those had a repeat haunt. That is not really supposed to happen, you know, with 50 different haunts. I've seen online that people will play a couple dozen games and never get the same haunt.

Our getting repeats has maybe made us a bit tired of it already. And to be honest, the pre-haunt exploration portion of the game at this point for us has the same rooms and same events and items popping up. So be are taking a break now to play the DandD version Betrayal at Baldurs Gate.

Yesterday after a Dead of Winter session that had us lose to the apocalypse in record time, we broke open Baldurs Gate and had a run through. It played very much like House, but with fun DandD themed differences.

I'll probably post at that version after a couple more plays. But I'll say for now that House is a great and fairly easy (until the Haunt) game I think anybody would have fun with, though in my case the replay value is short. But there is at least one expansion for the game, Widows Walk, which adds another level, the roof, and probably some other stuff. I may get that before too long just to check it out and freshen up the main game. 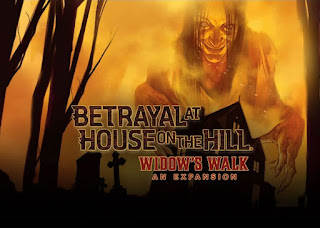