Over the years I have posted about my use of the old Runequest Apple Lane setting. Multiple times. For both its intended Glorantha setting, and my D&D homebrew world. Some names get changed up, and other details (mostly to prevent internet lookups by players), but basically present it as is. I renamed the town "Lemon Tree," for example.

This is a location in my world that runs on Negative Continuity. In other words, different players have gone there again and again over the decades, and only minor changes will be there, usually left over from the previous campaigns. Like when a female character married a major NPC. But most things just do a soft reboot. The Pawnshop gets assaulted on the full moon again and again. Sometimes by baboons, sometimes by orcs. Or in the recent games. Vaishino, a type of serpent people introduced in Magic the Gathering. 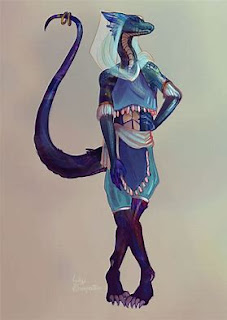 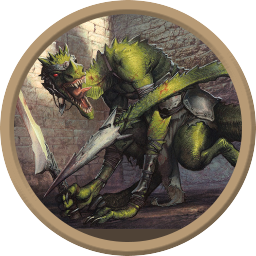 I was looking for something new to for the Pawnshop Scenario, and stumbled across these fierce reptilians. I imagined them easily being able to scramble up walls and across the roof of the shop.

I had designed the entire campaign to lead up to the Pawnshop scenario, followed by the Rainbow Mounds. A couple of the characters at chargen came up with an NPC, Billy, a fellow villager they grew up with. They would be going out in the world to look for him, armed with only a few clues. Intending to lead up to the Rainbow Mounds, I would put Billy in there, captured and charmed by Adorra, an Enchantress NPC who got involved with previous characters in another campaign almost 10 years ago and got magically trapped within the mounds. 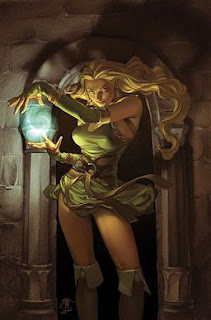 Anyway, the campaign, which I called "Trade and Turpitude", was mostly up to this point a caravan guarding series of games, leading up to the characters being dropped off in Apple Lane, uh, I mean Lemon Tree. 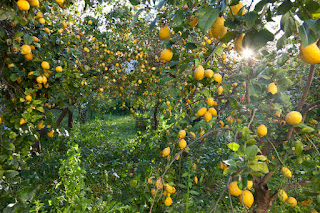 With the Pawshop encounter being the showpiece at this point in the campaign, I wanted to work up to it. I placed Lemon Tree in the Eastern Highands of the southern shires (in previous campaigns I was not calling the area highlands yet) and I wanted the area to have a decidedly Glorantha flavor. People almost living in a bronze age, and worshipping older gods not usually associated with the Kingdom. So Issaries, the trade god the pawship owner worships, or the Sheriffs deity Orlanth, are influential in this area. It's part of the kingdom, but no tax collector ever comes to call.

The Pawnshop encounter went well, I think, though it took 3 sessions to finish. For reasons I think I might explore in my next post, the PC's came into the evening pretty beat up from several encounters that day. Also, the encounter also involved the NPC's Relanis and Demul who I have mentioned before. the party is very divided about these NPC's, so as always they added a little extra tension. It was a hard fight, probably the toughest I've done for the pawnshop encounter, over several games, but they won.

I love that I can go online and find pretty decent maps of the area and the pawnshop. This was my first time doing it electronically. All the others were of course done on grease mats. That was always  a lot of work.