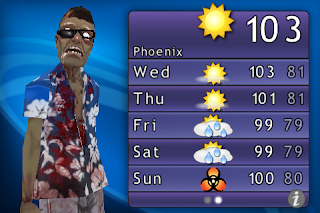 It's a subject that has been discussed to death the last decade or so, much in the way ninjas were in the 80's.

Resident Evil games, Walking Dead, Shaun of The Dead, Zak Snyders Dawn of The Dead, several other zombie films with various takes on the genre, etc of the last 20 years or so have made spooky, hungry ghouls pop culture phenomenon.

It's probably one of my favorite games, Dead of Winter, that has me in a zombie state of mind these days. Probably Walking Dead as well. A lot of the TV I stream is Pluto TV, and they have a Walking Dead channel constantly showing seasons 1-4.

When I started playing D&D as a kid, I was super into the magical, Mythic dungeon concept. It was kind of bizarre, kind of scary, creepy; a mystery, usually a horrifying one, is around every corner (unless you buy into that Gygaxian/Grognardian "every third room should be empty" palaver). But after years of them, they are still fun but lose a lot of that mysterious wonder. When you watch Romero's Night of The Living Dead as a kid, those lumbering, weak ass dead people terrifying. I mean, they are dead!

But then you get older, still thinking zombies are gross and creepy, but you start to get into the weeds a bit more on the subject. You're first major question is "how did this happen." Is it germ warfare gone wrong? Or is there a supernatural explanation? Each movie offers up possible clues to what might have happened. Astronauts bringing back radiation is mentioned on the telly in Night of the Living Dead. I think it was the original Dawn of the Dead poster that read "when there is no more room in hell.."

On Walking Dead, after season two zombies became third class co-stars: a backseat to evil humans. The Guv'na, The Wolves, The Whisperer's, that boss from hell Negan. Zombies Are now just the backdrop, more or less treated the same as a form of bad weather. You plan for it. You have procedures (grab the umbrella, put on a coat, gas up the chainsaw). But the show has long since become about interactions of the characters and the human threat. And for any of us who love Mad Max movies we know what the threat is. If The Road Warrior had zombies, Lord Humongous and Wes would still remain the scariest things in the Outback.  Anyway, when in season two our heroes ended up on Hershel's farm, it was an area light on zombies (spoiler: they were getting roped and locked up in a barn).

Speaking of that season, I disliked it quite a bit at first. Watching it I already knew why they were going to be exclusively at a single location the whole time, besides the odd trip to the bar for a drink or the pharmacy for pregnancy tests to see if Lori was rocking a Shane-baby, or birth control so Maggie could get her Glen on. But it was known that AMC was shifting the majority of the money for other, more critically acclaimed shows like Mad Men and Breaking bad, series that flounder a couple of seasons then blew up into huge ratings grabbers. And honey gets the money. But when I watch it now, I appreciate what happened in the same way I appreciate Spielberg not getting the shark to work. The toned-down season where characters talked their asses off in the kitchen about morals and dishwashing duties ended up putting the show in the direction of the new world still being about people, and zombies just a new normal in the background. Kind of like weather. And as was always kind of promised the human foes turned out to be often scarier than The Walkers. And the characters by recent seasons are just desensitized to the undead.

It's a natural progression. Night of the Living Dead is about a single night. You might be stuck in a small farmhouse with a near catatonic lady and a family headed by a loud-mouther boor, but it's all about the zombie problem. Front and center. In the original Dawn of the Dead, it's a messed up, horrifying situation. But once you get into the mall, clear it out and lock it up, a few months later your thoughts turn to food and shopping and all that. You might have to deal with the ghouls now and again, but it's just another part of the world now. Another danger. But one you better take seriously. The bikers who show up at the end of the movie are having fun, but they pay the price for not taking "zombie weather" seriously.

The Dead of Winter boardgame pretty much treats the zombies like weather conditions. When you leave the colony and go out in the field, or any time you want to kill a zombie, you roll a 12-sided die and the result is abstract. A wound (of which you can have three before dying), a frostbite condition (a wound that keeps on giving), or most rarely a zombie bite which can not only kill you but give you the hard choice of saving the victim or risking others getting infected and dying. 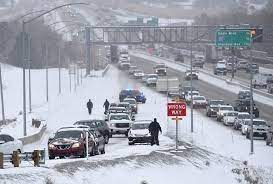 As the actual weather effect of frostbite, regular generic wound, and zombie bite are on one dice, it's all baked together. It's all "exposure." From the cold, from the everyday hazards of a wild world, and from a good old zombie bite. Sure, there are zombie counters that can overrun an area eventually and cause characters to die in the location if you don't set up enough barricades or kill some zombies off, but once again it's like mother nature. A flood. Rather than pile up sandbags you try to thin them out. Zombies becoming once again an everyday thing. At least abstractly. "Make sure and take your galoshes and shotgun, dear!" 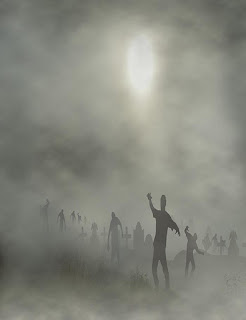 And just like Walking Dead or any modern zombie things, it's all about the characters. Dead of Winter has great characters galore, all with a special ability. It's what they do and what they get away with (or don't) where the fun lies. How they deal with the natural hazards, which includes the undead, is just dealing with nature.

Whatever they are or how they came to be, zombies on a series such as Walking Dead are kind of in the background. It took a while, but the characters are kind of desensitized from being around them, easily killing them, living with the problem for years. Much like how we think of the weather. If its mild no problem. If there is a storm and threat of flood or heavy snow, we up our game and put it at least temporarily to the forefront of our thoughts. When it calms down, its back to not thinking of it. Same with getting used to the zombie problem. Big herd of them comes through its battle stations. Just a couple of them show up, meh, get out your gun or knife much like getting a raincoat or snow shovel out when you need it. 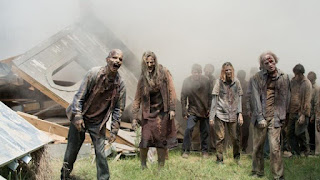 You deal with it, but afterwards you don't wonder how this could be a science or supernatural thing. Why they can exist for years without blood or working organs. Why they eat and eat and never seem to have poopy pants. Why the hell their shoes don't fall off after a few days. You just deal with it like any other natural problem, then wonder what board game to bust out tonight.

I recommend it be Dead of Winter.