NYE Boardgaming - The Long Night and King of Tokyo Halloween

On NYE I got to spend the night with my local besties B and L, and some of their local friends who they have gotten into some of the boardgames we love.

It was on a big rural property in the sticks. Foothills of the Sierra Mountain range about a half hour away. The area is still laden with snow from the big storms earlier in the week, and it's just beautiful. I got my own flat to sleep in for the night (with horses living just under it), so I was totally up for it and raring to go for drinking, smoking, and playing some games. B and L are also hitting the road soon (they spend about half the year out on the open road) so it was about my last real change to game with them for at least a couple months.

So after a bit of the usual holiday cheer we got down to it. B and L recently got the Dead of Winter expansion The Long Night. It ties in nicely with the original game, making it and even bigger play area. A bandit hideout is included, and also the location of "Raxxon," this games Umbrella corporation. I'm sure this is a ripe-off or Marvel comics old Roxxon evil corporation. Raxxon is making super zombies, and is also likely the cause of the zombie crisis. 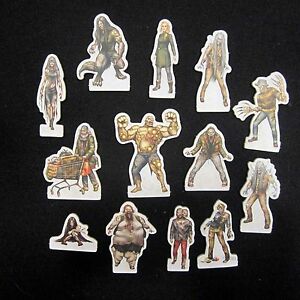 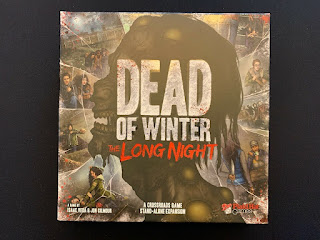 You also get a lot of new characters, including a monkey. 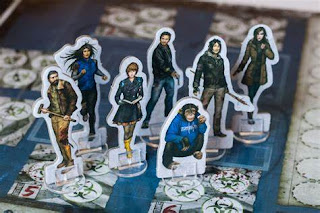 It plays out just like regular Dead of Winter. This was the first time doing it with 5 players, so there was a lot going on. By halfway through the game pretty much everybody at some point was accused of being the traitor. But towards the end it was clearly Bill, who was promptly exiled. 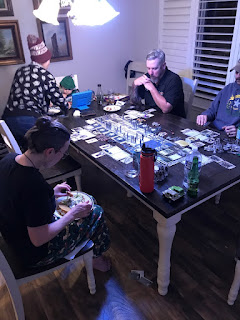 The paranoia is the best thing about the game, since everybody gets a motivation card with objectives, and if the player tries to meet them (such as the game being won with two weapons in your possession or whatever) and the actions don't appear to serve the common good, you will get eyebrows raised at you, traitor or not.

The players won the game, though I was lacking one of my objectives, so I didn't get to share in the bragging rights. 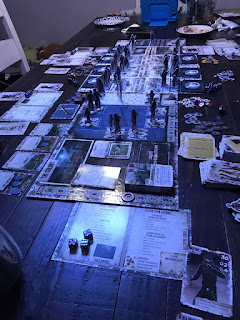 We also then played a few rounds of King of Tokyo, one of my quick game faves. But our kind hosts for the night owned the Halloween edition so we played that. One of the change ups from the regular edition is every character gets a costume card. So your Kaiju might be dressed as a cheerleader, or a princess or witch. This gives you a special ability. 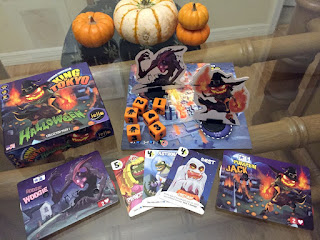 Since you don't always get a lot of power up cards in the original edition, I welcome something to make your monster different. But the costume thing kind of destroys any verisimilitude. OK, that is kind of ridiculous statement seeing as this is a whimsical game to begin with. But it's all good. It was just s different way to play it. And I did enjoy the chaos of a 5 person game.

And its all about being with friends on the last night of the year, and that is what counts the most. B and L have been really good to me the last couple of years, and spending time with them, even often as a third (or even 5th) wheel, is very important to me. So, the year for me was ended just right.