Your Gameworld: Reboots and Retcons 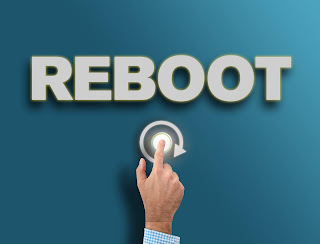 I was very fortunate as a kid, early on in my gaming, to have started a game world and kept with it for decades. It was really just a dungeon and a tavern to go to between games. That really only lasted a couple of sessions, as supply shops and residences besides the tavern became necessary. And that's how my setting Acheron grew. As things were needed. Often locations would be created by players as backgrounds for their characters, and that added to my world. So it was a growing thing, created out of shared experiences.

I always tried to maintain a consistency in my world. If something happened, then the world was forever affected by it. The Isle of Dread visited for the first time? OK, now it was no longer virgin territory. The Caves of Chaos battled through and the evil temple destroyed? Guess I'm never using that location again. At least not the way it was.

But I softened on that consistency in the last decade or so as I found myself wanting to reuse certain adventures that I loved. Mostly notably the old White Dwarf Magazine dungeon The Lichway. Also, I have had a lifelong love for the Runequest Glorantha town of Apple Lane, a module I also adapted for use in D&D. In the Lichway you very likely release a hoard of undead in the complex. In Apple Lane you will defend a pawnshop from an evening attack (in the Runequest material its a tribe of baboons), and eventually explore The Rainbow Mounds and fight the forces of the Dark Troll White Eye (an orc in my D&D setting).

Apple Lane I could reuse a couple of times because the first time (and maybe second and third) I used it for Runequest. Decades ago. For D&D I changed some names; Gringle became Gengle. Apple Lane became Lemon Tree. But most details stayed the same. Lichway was sort of "one and done" because, well, hundreds of undead at large in the place.

But there came a time when I realized the only person I was fooling with a sort of enforced purity of continuity in the world was myself. Every few years I found myself with a brand new group. In every case nobody had ever heard of Apple Lane or The Lichway. This was a fantasy world with no real value outside my games. Why was I so worried about continuity. Did it really matter?

But in a way I have found, for me at least, a happy compromise. A location reboot. I decided that some locations might be in sort of a dimensional loop (or whatever). Perhaps a curse or will of some godling that no matter what happens it returns the location, all its inhabitants, back to a zero setting. When one group of players is out of my life, I can refresh these old favorites to use again if I so choose. The undead of The Lichway return to their crypts. Dark Odo and her followers rewind back to their old positions. The local fishing village forgets the adventurers who came that time and unleashed the undead hoards who would keep them awake at night howling within the necropolis. Apple Lane itself is also in a continuity loop. Gringle will always need brave souls to protect his pawn shop. White Eye the orc always returns to life and haunts the Rainbow Mounds.

These are out of the way locations, so its easy to just reset and reuse.

There is a new wrinkle though. One of my old players from my home town is involved in my online Roll20 games. I want to use Apple Lane and its environs once more (maybe for the 5th time, in two worlds). But the thing is she had a character experience this 20 years ago. The entire adventure was a major point in her characters life. Back then she ended up falling in love with the pawn shop owners assistant "Hobbit John" (a duck in the Runequest version) and marrying him (yes, she was a hobbit as well, a cleric and local sheriff). So she would surely remember all this.

But its cool. She is a trusted old player. She has played in several different groups of mine over the decades. So I can go ahead and jerk the curtain a bit in her case. Let her know what I am doing. Tell her about the reboot concept. It would be a rerun for her, but its been long enough where she won't remember every detail so it can still be fun for her. And of course there will be differences. Hobbit John is gone, having married a players character and being released from whatever curse maintains the retcon in Apple Lane. My last go at the Lichway was different as well (she was not involved in that campaign as it was face to face before the pandemic) as noted in my previous posts about The Lichway.

So things can and should be changed up. But there is no negative side to reusing beloved modules and disrupting the continuity of your world. And modules aren't the only changes I've embraced. Hell, back in the day I let a friend run a campaign in my world where he promptly affected things on a continental level. For the longest time I just kept all his messing with the world as part of its history. But it got to the point where I said "why?" and just dismissed those things. Wiped them from the history. He certainly would never know. He died in the 90's.

Nobody really knows but me. And as I get older I just don't care any more. I'm not writing The Silmarillion here. Its just a D&D setting. When I'm gone it comes with me.  Its just about having fun and is no more serious than that.