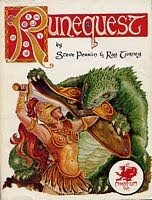 Runequest was the second game I ever played after D&D. When I started hanging out at the local hobby shop as a kid, I had only around a year’s worth of experience with D&D. But the older crowd there were sort of past D&D, and heavily into other games. Traveller and Runequest was what were getting the most play at that time. Owner Gary had campaigns of RQ going on, and he had one big wall of the play area covered in situational maps for his games. Gary loved that game so much. Gary died a few years ago, but you can still find some writings of his online outlining various Runequest themes. He had obviously continued on with the Runequest love from the late 70’s and onward through the following decades.

When I stopped hanging out in the store after the early 80’s, Runequest pretty much left my life. The gaming side of my life would carry on for many years with only three favorites; AD&D, Call of Cthulhu, and Champions (games like Toon, Bunnies & Burrows, and Empire of The Petal Throne never got on my playlist, unfortunately). But I left my RQ at Aero Hobbies and never really looked back. I think my preference for AD&D, besides true “Sorcery” magic, was that I had a game world I loved and the rules of RQ would never have translated into it. By the late 80’s, RQ would have been just another game that my regular players were unfamiliar with, and would have taken up precious Champs and Call of Cthulhu time if I introduced it to them.

But man, those early games at the shop. They were this huge mystery to me. The world of Glorantha was based on historical places that were very much unlike what Tolkien, Terry Brooks, and other “classic fantasy” writers were presenting in their worlds. It seemed alien to me. Of course, I had yet to have any interest in ancient Mesopotamia, so I didn’t grok that influence. Adventures took my guys (my favorite was a Dragonnewt and second favorite was a duck. I called him “Scotty MacQuack” because I found a duck figure playing a bagpipe!) from the rough plains and temples of Prax, all the way to the greener hills and grasslands of Lunar Tarsh and Dragon Pass (I think I have that right). This was a patchwork world that was being put together and expanded, in-game, by the game designers at a time when I was having my earliest adventures with it. Cheapo modules like Apple Lane and Barristor’s Barracks gave me the medium to eventually start running some Runequest adventures for my friends. But those games soon got swept away by other things we wanted to play.

Well, I got my hands on a copy of second edition, 1970’s Runequest, and some other items on PDF like Cults of Prax, Pavis & Big Rubble, and Snakepipe Hollow. I never had these before, and my imagination is being fired up again by reading more about Glorantha than I ever did back in the day. Then I was just confusedly being a character running around in these modules and sourcebooks being run by the older pricks at Aero. Now, with all this reading I’m doing, I finally am starting to feel like and “insider” in regards to Runequest. I’m unlocking it’s mysteries for myself, man!

So I guess you could say I am a bit obsessed by old RQ right now. With a (probably short) Knights of The Old Republic campaign in full swing right now, I won’t be running any Runequest any time real soon, but when I do get to introduce its mysteries to my regular players I’ll be ready. It’s a long road to Rune Lords status. Better to get on that road sooner rather than later!
Posted by Kevin Mac at 5:25 PM