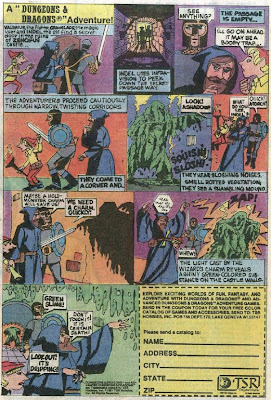 In the early 80’s, D&D advertisements where all over the back pages of comics. There were several of them in this particular series, and they appeared every two or three months. I imagine the time lags may have represented the folk at TSR scrambling to find a better artist for the most recent ad compared to the piece of crap hack who hammered out this first uninspired strip.
Is this how they sold the game? I mean, they wanted to make money, didn’t they? Why phone it in like this? These were appearing in comics that were drawn by greats like John Romita Jr. and Frank Miller. Drooling mongoloids might have liked the goofy adventuring represented here, but did they have the brain power to understand how to play if they bought it? I guess just making the sale was important. Whatever – D&D became more and more popular, despite these terrible comic craptacular adventures.
As I was an avid comic book guy since around the age of 6, they were pretty much preaching to the choir in my case. I already had a few years of D&D under my belt when these came out. More importantly, even at around 15 years old I was running games that were cooler than what was happening to these low-rent, cookie cutter adventurers (if you want to read about somebody who preferred their D&D to pan out like these adventures, check out some old posts at Grognardia).
Speaking of cookies, one of the adventurer’s is a damn Keebler elf. No joke, look at the guy. Disney characters laugh at this pathetic excuse for a Legolas. You ain’t going to see this guy swinging around on elephants shooting three arrows at a time. Gimli probably would not have much trouble beating his orc-killing score. Better yet. Look at panel 5. WTF is he doing? Levitating? Or is that a jump? I’m getting a headache just looking at it.
I know the Shambling Mound looks like its Monster Manual counterpart, but seeing as this ad appeared in Marvel Comics, weren’t they worried about a lawsuit or something? I mean, that’s the damn Man-Things nose, man! I guess the Marvel Bullpen didn’t take D&D all that seriously, true believer.
Since when did a Hold Monster spell light up the night? What other spells act as a light spell, other than a light spell that is? Well, it’s a good thing, because green slime was on the walls, and according to that douche Grimslade it is certain death. Not quite, but in our next adventure the Keebler elf finds out the hard way that you don’t mess with that emerald snot!
Oh, and a hot blond cleric and a much better artist shows up. See you then, Pilgrim!
Posted by Kevin Mac at 4:09 PM